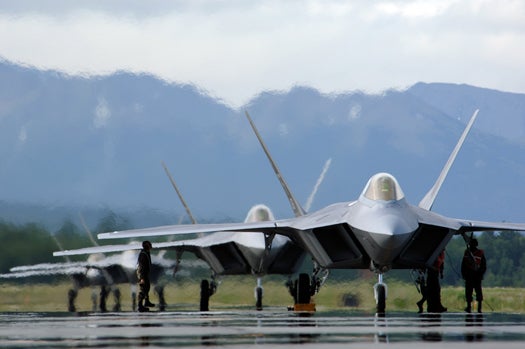 The F-22 Raptor stealth fighter was designed to defeat any threat it might face on the modern battlefield. However, earlier today an even tougher fighter based out of 1600 Pennsylvania Avenue shot down seven of the planes before they even got off the assembly line.

In a 58-40 vote today, the Senate agreed to remove an order for an additional 7 planes, capping the run at the 187 already requested by the government. The vote comes after weeks of fighting between the White House, the Secretary of Defense, the Chairman of the Joint Chiefs of Staff and the head of the Air Force, all of whom opposed the additional planes, and members of Congress who supported the expanded order.

The seven planes would have cost $1.75 billion. President Obama so strongly opposed the addition of the planes that he vowed to veto the entire $679.8 billion defense bill if the Senate didn’t remove the additional request.

The argument saw bipartisanship on both sides of the debate, with President Obama uniting with his former rival John McCain in denouncing the order, and with 14 Democratic Senators voting to keep the seven additional planes, whose construction would benefit their home States.

The central front of the legislative showdown revolved around determining the priority’s of the military. Obama, Secretary of Defense Robert Gates, and most of the military’s upper echelon argued that the F-22, which was designed to dogfight advanced Soviet fighter jets, had little application in America’s current wars against insurgent groups in Iraq and Afghanistan. Additionally, Secretary Gates added that in the zero sum game of defense spending, every dollar spent on the F-22 was a dollar not being spent on the wars America is currently engaged in.

“The grim reality is that with regard to the budget we have entered a zero-sum game,” said Secretary Gates. “Every defense dollar diverted to fund excess or unneeded capacity is a dollar that will be unavailable to take care of our people,”

The opposition, conversely, sees the F-22 as a key component in maintaining America’s long term military supremacy in the face of a rising China and a resurgent Russia. Also worth noting, the F-22 program employs thousands of people, and those employees form a power constituency a year before a midterm election in which unemployment numbers will play a large role.

This, however, is not the end of stealth fighters in general. One of the objections to the F-22 voiced by Secretary Gates was that the plane was too limited. Conversely, the F-35, another stealth fighter, can perform many of the same jobs as the F-22, fits in better with the counterinsurgency wars the US faces and costs far less than the F-22. So far, the government plans to build 2,400 F-35s, compared with 187 F-22s.

Said President Obama of the vote, “”As Commander-in-Chief, I will do whatever it takes to defend the American people. But I reject the notion that we have to waste billions of taxpayer dollars on outdated and unnecessary defense projects to keep this nation secure. And that’s why I’m grateful that the Senate just voted against an additional $1.75 billion to buy F-22 fighter jets that military experts and members of both parties say we do not need.”