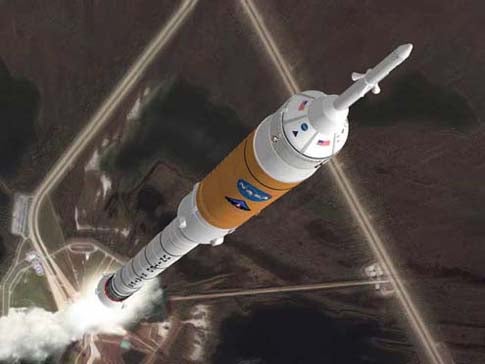 Next year, 33 years after its maiden flight, the space shuttle will retire. What happens after that has become subject to fierce debate within the space agency. The designated successor program, named Constellation, was the darling of previous NASA administrator Michael Griffin, but a new review now has the space agency looking elsewhere for a ride back into the firmament.

The centerpiece of the Constellation program was the Ares rocket. However, that rocket needs billions of dollars more in funding to reach operational status, and has been plagued by numerous engineering problems. Now, some are proposing an alternative rocket system that makes use of already existing shuttle parts.

The plan, which would be $28.4 billion cheaper than Constellation, was recently submitted to an independent panel reviewing NASA shuttle replacement options. According to the Associated Press, NASA engineers worried that the expense of Constellation would get cut, leaving the agency without a ticket back to the moon. So they developed this plan, which, coming in at a lean $6.6 billion, has a much lower chance of getting the axe.

The plan calls for the continued use of the solid fuel boosters and fuel tank used to launch the shuttle into orbit. Rather than designing a whole new rocket like Ares, NASA would only have to design a cargo vehicle that would attach to the existing rockets. Not only would this allow NASA to reuse the rockets, but it would also allow them to preserve existing launch pads as is.

The drawback to the new plan is that the rockets would not be able to reach any point beyond low Earth orbit. That means NASA would still need to develop additional rockets to reach anything beyond the International Space Station, like, say, the Moon or Mars.

The plan seems to be meeting a warm reception from the panel, all of whom are mindful that the Obama administration shares neither the Bush Administration’s funds nor their enthusiasm for manned space flight. The panel will meet again in the end of the July and beginning of August, at which point the plans for replacing the shuttle will no doubt come into sharper focus.