Here at Popular Science, we work under the assumption that ray guns are cool. But you know what’s even cooler?... 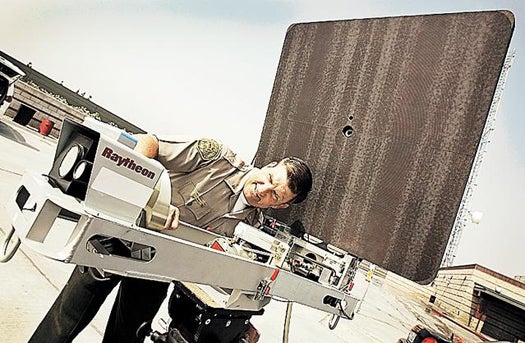 Here at Popular Science, we work under the assumption that ray guns are cool. But you know what’s even cooler? A flying ray gun. And thanks to an $8 million dollar funding bump from the Air Force, a flying ray gun is closer to production than ever.

The defense company Raytheon unveiled the beam weapon in 2001; back then they mounted the device on a Humvee. Now, the military’s Joint Non-Lethal Weapons Directorate has requested an upgrade to the weapon that would allow the JNLWD to attach it to helicopters and other aircraft.

To meet the challenge of upgrading the ray gun for flight, Raytheon did more than shrink it down. The airborne version can also be directed electronically, and shoot out multiple microwave beams at separate targets, all while on the move.

There has been some controversy with the microwave beam, as one test subject ended up in the hospital with second-degree burns from the weapon, leading some to question whether or not the beam gun is truly non-lethal. Others have argued that a non-lethal beam weapon is no better for crowd control than a fire hose, but many times more expensive. That last point has proven particularly troubling for the project, which recently ranked last in cost-effectiveness in a government review of non-lethal weapon projects.