We at PopSci appreciate new weapons. And lasers. And laser weapons. Which is why we’re excited to tell you that... 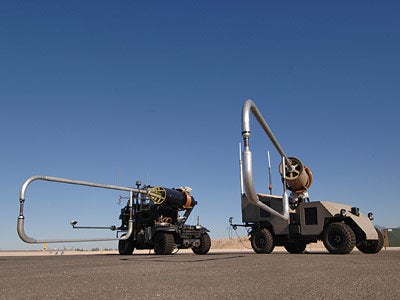 We at PopSci appreciate new weapons. And lasers. And laser weapons. Which is why we’re excited to tell you that the Navy and the Marines have given a company called Applied Electronics about a million dollars to attach lasers onto planes. The weapons would be ultra-short-pulse (USP) lasers, which shoot beams of frequent-pulse light that create a path through the air, via which bolts of electricity can travel toward a target.

Applied Electronics used to exist in the form of the company called Ionatron, which was tasked with creating military-grade lightning weapons (above). The project and company failed — hence the lack of lightning-based weaponry today — so it’ll be interesting to see if USP laser weapons are more successful. If so, they might be able to test the lasers on popcorn-filled houses.