From the PopSci Archives: the Glorious Apollo Program

On the 40th anniversary of the moon landing, we take a look at the tech of the Apollo program as covered in the pages of Popular Science 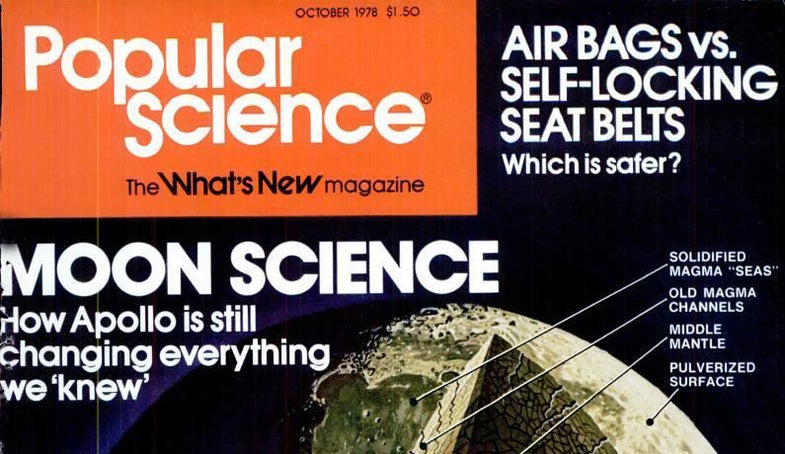 With the monotone bleeps of Sputnik still ringing in a rattled nation’s ears, President Eisenhower committed America to a program of manned space flight, a program culminating in the Apollo 11 mission and its legendary moon landing.

Whether you believe the astronauts went in peace for all mankind, or as part of a nationalistic competition driven by Cold War paranoia, there’s no escaping the profound impact the moon landing had on the human psyche. The moon landing showed the whole world how technology can shift the bounds of the possible, and Popular Science was there the whole way.

So, in honor of the 40th anniversary of the moon landing, take a look back at Popsci‘s coverage of the Apollo program, and the age when mankind took its first fledgling steps into the vast cosmos beyond our tiny blue world. 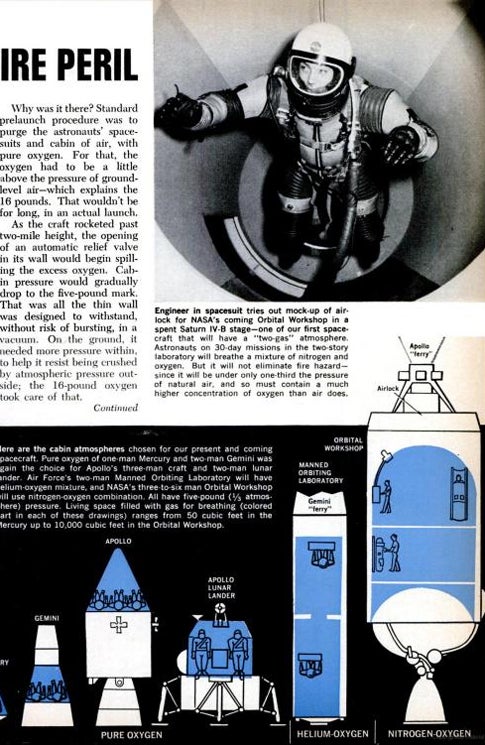 After the tragic fire on Apollo 1, NASA engineers set about designing a less flammable atmosphere for the capsules. Here, Popular Science details the differing atmosphere compositions in the Gemini and Apollo modules, and in some spacecrafts that never made it off the drawing board. By cutting oxygen with other gases like nitrogen, NASA cut down on the risk of cabin fires. 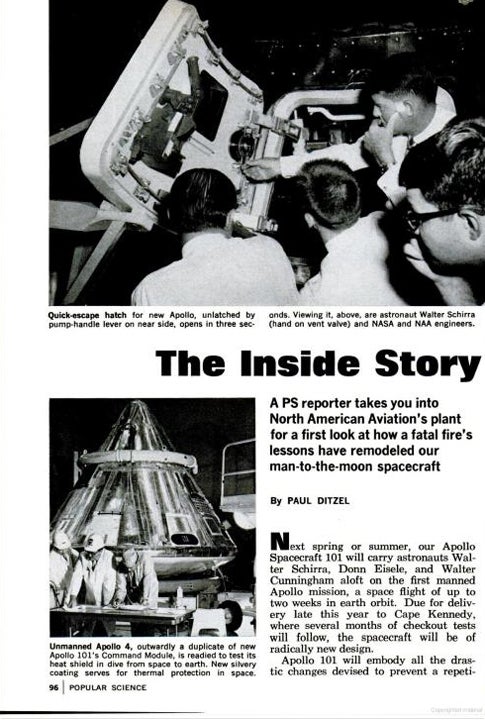 NASA didn’t just change the atmosphere in response to the Apollo 1 fire, they changed the whole capsule. Here, Popular Science gets a first look at the redesigned spacecraft. The photograph highlights the outward-opening door, a significant improvement over the inward-opening door that made escape from Apollo 1 impossible. 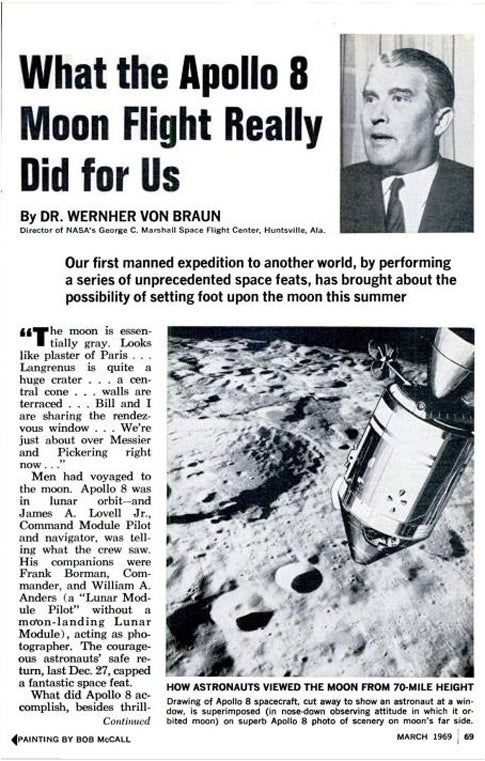 During the Apollo program, rocket scientist Wernher von Braun practically had a monthly column in Popular Science. He regularly wrote articles explaining the scientific goal or unique engineering feat of each mission. Here, he details the discoveries made during Apollo 8’s trip around the moon. 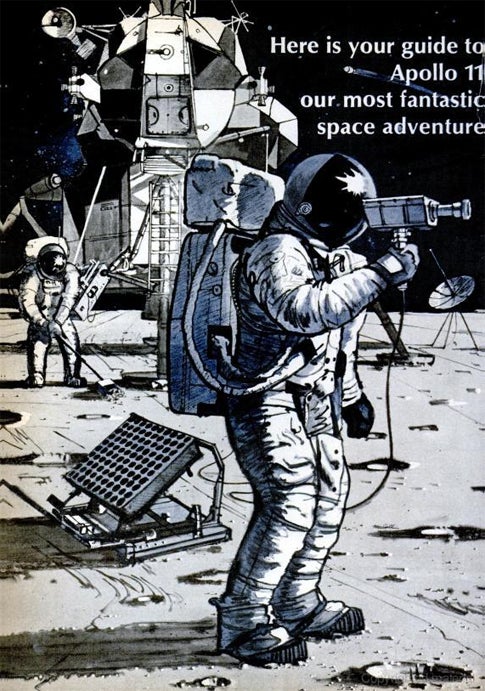 For the July 1969 issue that would be in the hands of readers as they watched the moon landing, Popular Science provided a play-by-play breakdown of the astronauts’ entire mission. Oddly, though, Apollo 11 did not make the cover of the July 1969 issue. That privilege went to a story about a new kind of rotary engine. 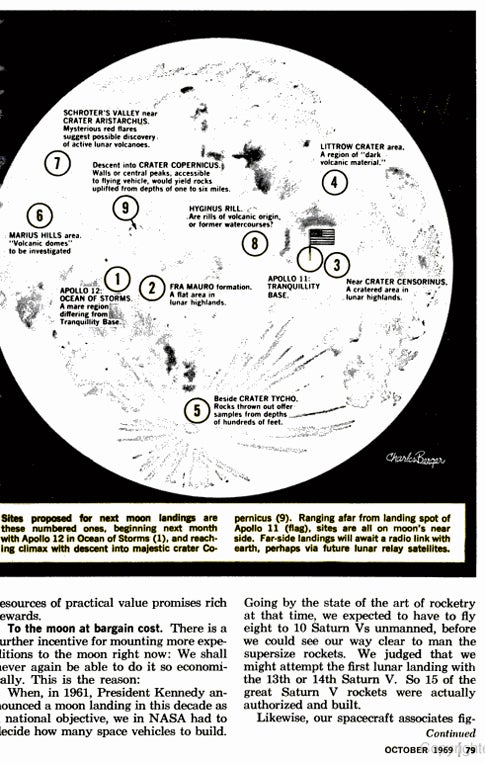 Almost as soon as the Apollo 11 crew returned to Earth, some began to question the reasoning behind repeat visits. Here, only three months after the first moon landing, Wernher von Braun was back in the pages of Popular Science, arguing the reasons for future manned missions to the moon, detailing possible landing sites for Apollo 12, and explaining the scientific value of lunar samples. 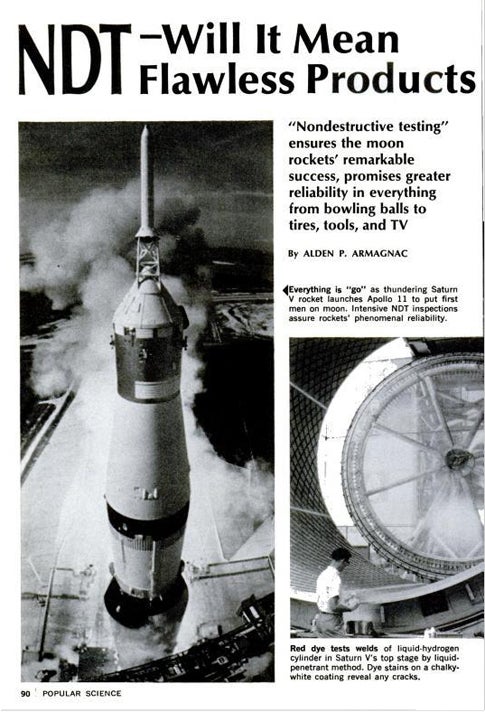 In solving the technical challenges of going to the moon, Apollo engineers generated plenty of technology useful to life on Earth (and some, like Tang, that aren’t useful anywhere). Here, Popular Science explains how the Apollo program advanced the field of non-destructive testing, a process that allowed for more extensive product testing for consumer items. 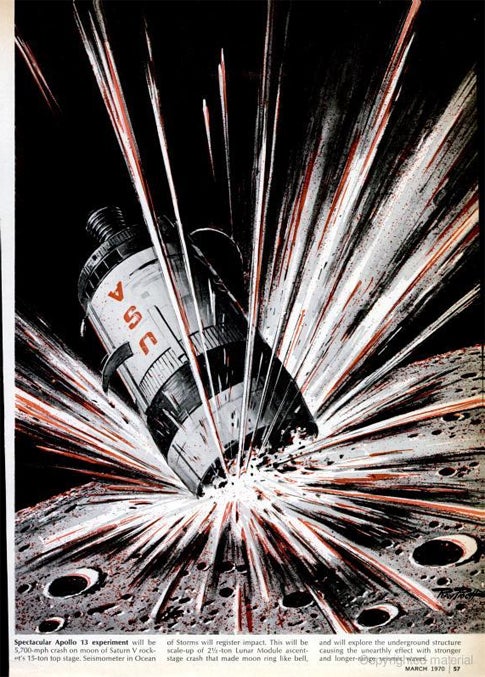 While Apollo 13 would eventually become sidetracked by an explosion in space, the mission was slated to carry out a number of interesting experiments. The experiment illustrated here involved deliberately crashing an object into the lunar surface and measuring the outcome, a project very similar to NASA’s LCROSS probe launched this summer. 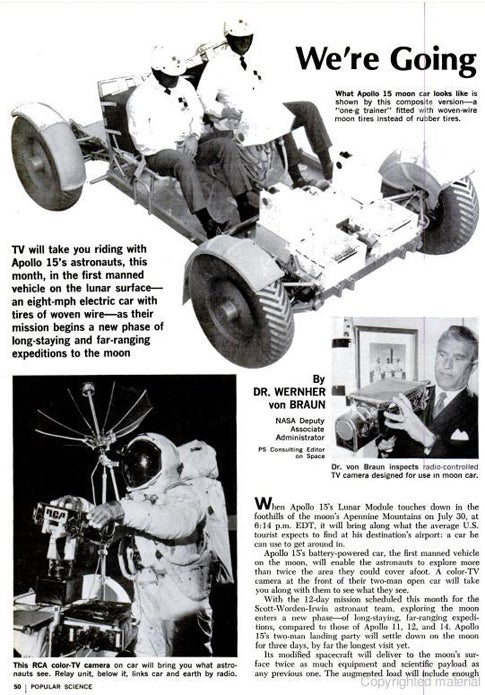 This 1971 articles combined the two topics that have been Popular Science‘s bread and butter in the second half of the 20th century: space and cars. The lunar rover, first carried to the moon aboard Apollo 15, allowed the astronauts to cover more ground and collect more geological samples than ever before. 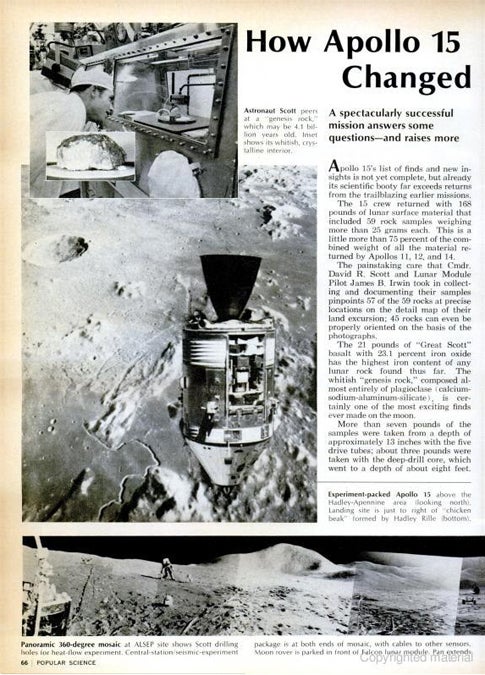 Having proven that they could get men to the moon and back safely, NASA placed a greater emphasis on science than equipment testing during the later Apollo missions. For Apollo 15, the astronauts took an extensive geology training course, and collected more rock samples than any previous mission. 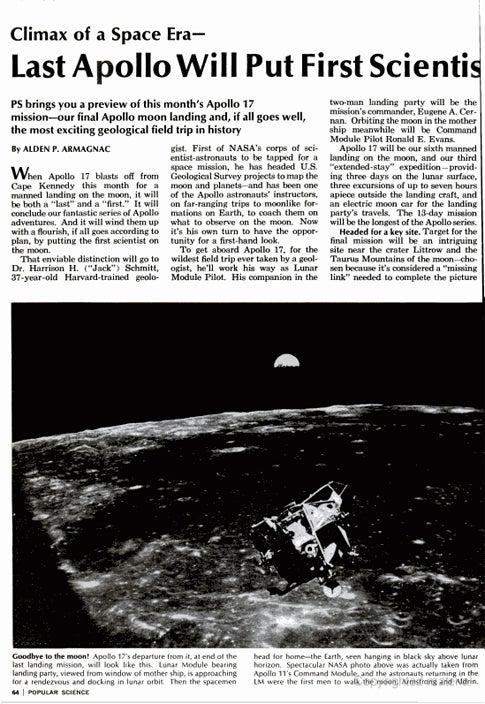 Hard as it is to believe, given the supposedly scientific nature of the Apollo program, NASA didn’t actually send a scientist to the moon until the final mission, Apollo 17. That astronaut, a geologist named Harrison Schmitt, was the first non-military service member to fly into space. While flying to the moon, Schmitt took the famous “blue marble” photo of Earth that Al Gore credits with helping start the environmental movement.
apollo +40
apollo missions
archives
astronauts
moons