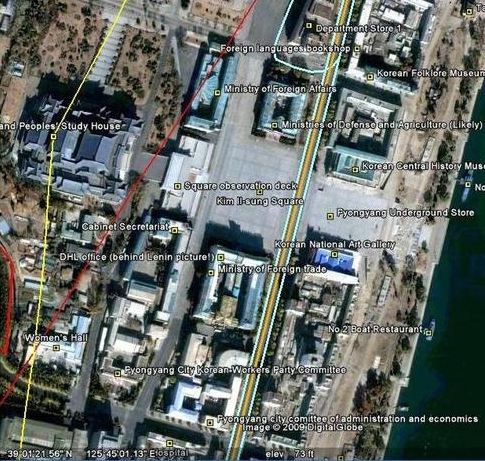 Using Google Earth, his own legwork, and a slew of amateur spies, Curtis Melvin has mapped out all of North Korea’s secrets. Called “North Korea Uncovered”, the project has pinpointed everything from nuclear facilities to restaurants, from anti-aircraft arsenals to a waterslide.

Over the last two years, Mason started compiling all of his own observances from his travels in the country. He then started adding the findings of several other unnamed spies, in order to create a comprehensive map of the world’s most secretive country.

It remains unclear how Supreme Leader Kim Jong-il will respond to the release of these state secrets. He has, however, been busy lately naming his youngest son his successor and testing even more nuclear weapons despite international hand-wringing. He may even be commissioning a similar map of U.S. territories, after a 266-page “highly classified” report on American nuclear facilities and stockpiles was accidentally published by the federal government. Perhaps international thermonuclear warfare will now become much more like a game of Risk, with each player knowing just where all the pieces on the board are.

This is just the latest in a series of awesome uses that have been found for Google Earth, which are commemorated in our gallery here, on the occasion of the virtual globe’s fourth birthday this month!

[Via Gizmodo, and the New York Times]