After years of planning, ground is officially being broken in New Mexico for the world's first interstellar airport 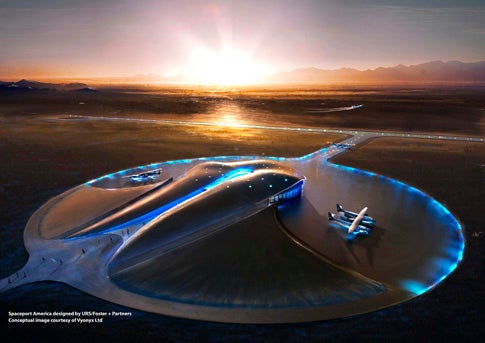 In spaceport, no one can hear you buying the latest John Grisham book

For everyone looking to hop the next commercial flight to space, your departure gate has finally been announced. Almost two years after the first plans were announced, construction has finally begun on Spaceport America. The spaceport, which will serve as the launch and landing pad for Virgin Galactic flights, is the first of its kind anywhere in the world, and represents the first serious commitment of infrastructure to manned commercial spaceflight.

According to the the project website the festivities kick off today with a panel of speakers, food and drink, and even a mariachi band. Tomorrow, the construction begins in earnest.

Currently, Virgin Galactic only has two space ships, so it will probably be sometime before the facility experiences O’Hare and LaGuardia level traffic. So now might be the best time to sign up for a flight, before Spaceport America starts experiencing the soul-crushing delays that keep John Grisham, Hudson News, and Brookstone in business.