Do You Have a Bomb-Defusing Ray Gun to Spare? The Navy Would Like a Word

Despite years of failure, the Navy continues to look for futuristic solutions to the IED problem 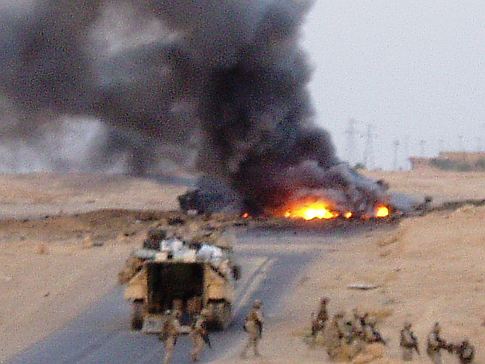 The U.S. Navy is still looking for an energy ray to defeat IEDs. However, unlike previous attempts, the new technology they’re dreaming of would render the explosives inert, rather than prematurely detonate them.

Improvised Explosive Devices (IEDs), also often referred to as roadside bombs, have been the deadliest weapon used by anti-U.S. forces in both Iraq and Afghanistan. The devices prey on the U.S. military’s dependence on roads for logistics; they target supply convoys and patrols alike. Unfortunately, many of these mines can’t distinguish between U.S. Marines in a Humvee and an Iraqi or Afghan family in an Opel, leading to many civilian deaths as well.

All previous attempts to counter roadside bombs with electromagnetic radiation have failed spectacularly.

With this new proposal, the Navy hopes to avoid making the same mistake a fourth time. The solicitation for ray designs states that the technology the Navy is interested in would break down the explosive devices by altering the explosives themselves, as opposed to simply heating or zapping them until they blow up. The Navy doesn’t specify exactly how this would work, noting only that the reaction should occur “at the molecular level.”

Interestingly enough, while the Navy continues to look for high-tech solutions to the IED problem, a report by Lieutenant Colonel Thomas H. Magness, the head engineer at the National Training Center, claims that “the most effective way to prevent the effects of IED on friendly forces is to deny the enemy the opportunity to ever get an IED on the ground.”

Yeah, but fancy, expensive energy weapons are so cool.