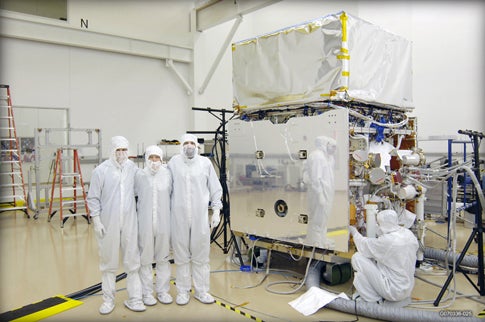 For astrophysicists, evidence of dark matter has always seemed to dangle just beyond the grasp of their evidence. Their theories predict it, the motion of galaxies implies it, but direct observation of this caliginous material remains elusive.

Now, new data from NASA’s latest space telescope has sparked debate about whether or not dark matter has finally been observed.

The controversy revolves around a discrepancy between observations made by NASA’s Fermi Gamma-ray Space Telescope and a a European positron/electron sensing satellite named PAMELA.

Earlier this year, PAMELA (or Payload for Antimatter Matter Exploration and Light-nuclei Astrophysics) detected an usual burst of positron and electron radiation that some have theorized came from the destruction of dark matter. A balloon-mounted sensor named ATIC corroborated the PAMELA findings, but neither experiment recorded an anti-proton burst theorized to accompany the electron/positron radiation.

However, measurements made by the Fermi telescope seem to contradict the ATIC and PAMELA data, and imply that the positron/electron burst emanated from a less exotic source than exploding dark matter.

So far, neither side seems to have the upper hand in the debate, and as the Fermi telescope continues to make new observations, we can look forward to a number of new chapters in this story.