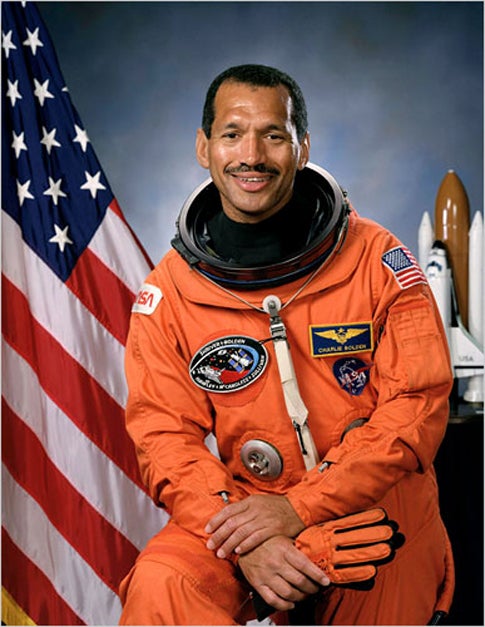 Astronaut Charles F. Bolden Jr. seen in NASA handout photo from 1991. President Barack Obama will name former space shuttle commander Charles Bolden to lead NASA, the White House said May 23, 2009, in the midst of a major shift in the U.S. human space program. Bolden, who would become the 12th administrator in NASA's 51-year history and its first black head, is seen as a strong advocate for human space flight. REUTERS/NASA/Handout (UNITED STATES SCI TECH POLITICS) FOR EDITORIAL USE ONLY. NOT FOR SALE FOR MARKETING OR ADVERTISING CAMPAIGNS.
SHARE

Since January 20th, NASA has been flying without a pilot. Now, President Obama has appointed former Marine General and Space Shuttle pilot Charles Bolden, Jr. to grab the rudder and take right the craft.

Bolden inherits a tough job. With the impending end of the Space Shuttle program, no successor space craft available for a number of years, budget constraints, a debate over the future of manned flights to the moon and Mars, and a general apathy in the public about space flight, Bolden may be in for a rocky ride to rival his trips over Vietnam and into space.

Bolden, a former Marine aviator and the first African-American shuttle pilot, flew the space shuttle on four missions, including the flight that released the Hubble Space Telescope into orbit.