High-schoolers' inventions lead the way to outer space; Popular Science was there 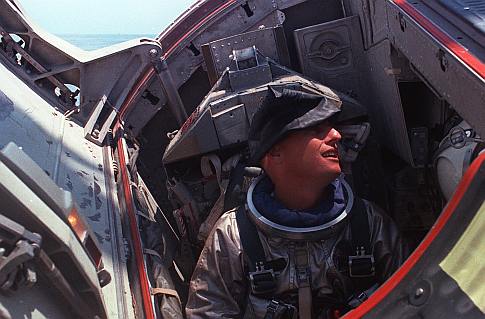 What if you knew that a ten-minute podium presentation could alter your life’s course for decades? Seasoned entrepreneurs sweat out this kind of tension when they make elevator pitches to venture capitalists. But at the Pete Conrad Spirit of Innovation Awards Summit, the presenters on the hot seat are all between 14 and 18 years old.

Named after Charles “Pete” Conrad, an astronaut who flew in the Gemini V mission, the Conrad Awards honor high school students who develop business ventures related to lunar exploration, personal spaceflight, or renewable energy. But accolades aren’t all that’s up for grabs. The 21 finalist teams gathered at California’s NASA Ames Research Center last week were competing for more than $120,000 in grants, as well as for opportunities to work closely with scientist and executive mentors to turn their concepts into commercial reality. Think “American Inventor” for the younger age bracket, with a dash of reach-for-the-stars whimsy.

Hang around the teenage finalists for a few hours and one thing becomes clear: These are no introverted high school geeks. True, the young presenters — clad in de-rigueur suits and ties — can sound a little rehearsed at first, carefully reading talking points from index cards. But they shine during question-and-answer sessions, answering every query the judges fire at them with such aplomb you’d swear they were seasoned execs. And they find plenty of excuses for humor. “Two hydrogen atoms walk into a bar,” 17-year-old Sahil Prasada of Team BioH quipped during his Q&A session. “One says, ‘I lost my electron,’ and the other says, ‘Are you positive?'”

These kids may work the audience like old pros, but unlike many business vets, they’re completely lacking in cynicism. Their goals are gargantuan, and — if you take their word for it, anyway — they have every expectation of reaching them. One team, Final Frontier Apparel, wants to devise a space suit fitted with microprocessors that monitor astronauts’ vital signs and keep their muscles and bones in top condition through electrical stimulation. Another, ALGAE (Advanced Lunar Greenhouse Air Exchange), aims to grow algae in enclosed bioreactors to create a limitless source of breathable air on the moon. “We want to go further than exploration,” says ALGAE team member Ele Simmons, who sports a jaunty Einstein necktie. “We want people to be able to go to the moon and have a constant supply of oxygen.” And then there’s the Latino College Preparatory Academy Extreme Science team, which is developing a solar array it claims will cost $5,000 but produce as much electricity as a typical $20,000 residential installation. “We do have a lot of competition,” admits 17-year-old Roberto Larios, “but we’ve found a way to reduce the cost of solar power to one-fourth of the original, and we already have support from IBM and NASA.”

Projects like these might seem like moon shots, but the business community — not wanting to miss out on the next Burt Rutan-in-the-rough — is tracking the young inventors’ progress closely. Among the visitors sitting in on student presentations were Steve Jurvetson of VC firm Draper Fisher Jurvetson and David Pensak, a computer-security veteran who spent 30 years at Dupont. “I was blown away. The kids far surpassed my expectations with their understanding,” says Tom Ingersoll, CEO of space communications firm Universal Space Network, who helped judge some of the space-related entries. “I think some of these business concepts are very viable.” But more important than whether teams hit commercial pay dirt, says Conrad Foundation executive director Josh Neubert, is that the competition promotes an out-of-the-box way to think and learn. “School says, ‘You need to learn these equations because that’s what you’re supposed to learn.’ We say, ‘Create what you think is cool, and we’ll give you the tools to make it real.'”