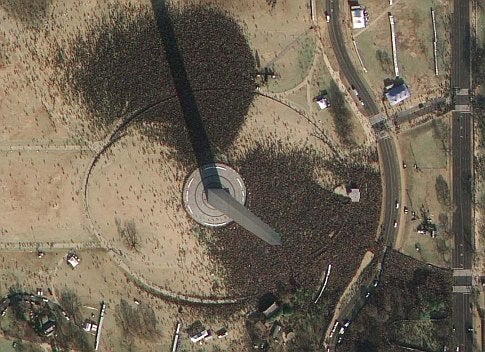 As promised, here are stunningly clear satellite images of the tops of some two million heads during today’s inauguration. These images were snapped at 11:19am today by GeoEye-1, the most powerful commercial imaging satellite in the sky, from 423 miles above the trampled grass on the National Mall.

GeoEye-1’s optics allow it to discern objects about 16 inches in size, or about the size of home plate. You might notice, though, that the people in these photos look smaller than they should at that resolution. That’s because current U.S. Licensing restrictions require that the GeoEye-1’s images be resampled to roughly 19.6-inch ground resolution. Boo that.

Still, these images are fantastic. I have to wonder, though, what was the deal with the weird crowd shapes around the Washington Monument? And doesn’t the crowd look a little thin in some of the prime spots, like just behind the reflecting pool in front of the Capitol Building, or that patch in front of the western side of the National Gallery of Art. Anyone there who can help figure this out? Can you spot your head? 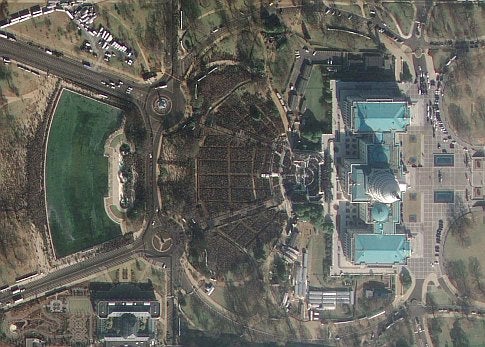 Crowds at the Capitol