Fly Me to Mars, Shuttle-Style 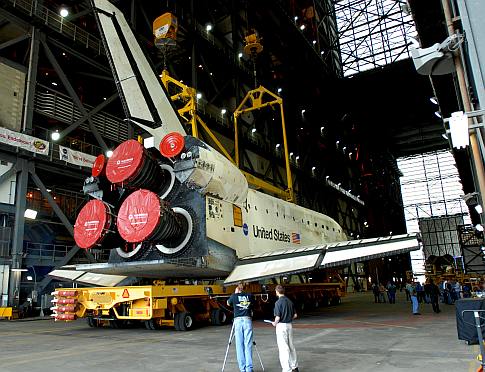 NASA plans to donate or lend three of its space shuttles to museums in 2010 — but the co-founder of a rocket launch firm thinks the shuttles could help send humans to Mars.

Two space shuttles tethered together would pirouette around a center propulsion stage, providing artificial gravity for the crew. An accordion-style crew transfer conduit would connect the airlock hatches of both shuttles.

The modest proposal, titled “Mars on a Shoestring,” surfaced this week on the website of inventor Eric Knight. His aerospace firm, UP Aerospace, previously launched the ashes of Star Trek’s “Scotty,” James Doohan, and astronaut Gordon Cooper into space in 2007.

Mars pioneers could subsist on food grown through hydroponics gardens and rely on regenerative life-support systems similar to those on the space station, Knight claims. He admits to one catch: volunteers would resign themselves to becoming the first permanent residents of the Red Planet, barring follow-up missions to retrieve them.

Another potential difficulty receives less mention — studies have shown that deep space radiation poses a high level of risk to any Mars-bound crew.

Knight’s pioneering and conservationist spirit notwithstanding, NASA’s attention seems focused elsewhere these days. NASA administrator Mike Griffin plans to step down on Jan. 20, and the space agency’s plans for the Constellation program’s return to the moon could face overhaul by the incoming Obama administration.

Museums have also already begun clamoring for a shuttle-sized piece of history, despite the hefty price tag of $42 million required to prepare the vehicles for public viewing.

But even if Knight’s proposal gets filed in the dust bins of history, that doesn’t mean Mars will remain forever out-of-reach. PopSci recently paid a visit to the simulated Mars habitats of NASA’s Spaceward Bound program. And then there’s a very vocal former astronaut named Buzz who says it’s Mars, or bust.