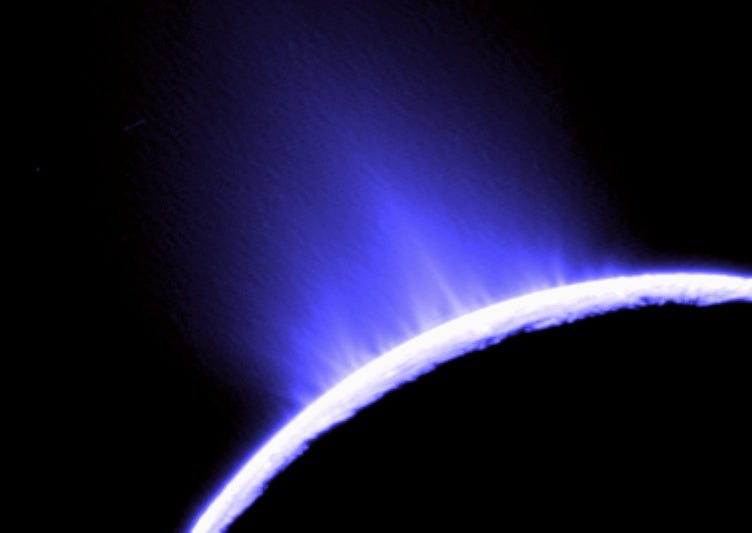 Beneath the central Antarctic ice sheet lies Lake Vostok — a frozen freshwater lake about the size of Lake Ontario, with depths up to 650 feet. Now, scientists believe that Saturn’s icy moon Enceladus may harbor a similar underground reservoir.

In 2005, high-resolution images from the Cassini-Huygens mission to Saturn and Titan revealed icy jets and plumes ejecting particles into space above the southern polar region of Enceladus. After examining several models, researchers working on the Cassini mission theorized that the source of the plumes could be pockets of liquid water close to the surface of Enceladus — like icy versions of Yellowstone’s Old Faithful geyser.

In 2008, Cassini completed several “flybys” of Enceladus, including one on October 9 that brought the spacecraft to within just 16 miles of the moon’s surface — the closest flyby yet of any Saturn moon. Thanks to Cassini’s cameras and instruments, these flybys gave researchers a closer look at the plumes. Scientists from NASA’s Jet Propulsion Laboratory, the University of Colorado, and the University of Central Florida teamed up to analyze both the water vapor plumes and the ice particles being ejected from the moon. Their conclusion? That the plumes may come from a liquid water source beneath the surface of Enceladus. According to the scientists, the geysers’ behavior supports a mathematical model that treats the vents as nozzles that channel water vapor from a liquid reservoir to the moon’s surface at supersonic speeds. The team’s findings were reported in the November 27 issue of the journal Nature.

Because water is a fundamental requirement of life, the presence of liquid water on Enceladus would have major implications for the possibility of life within icy bodies of the outer solar system. Currently, liquid water is only known to exist in two places in the solar system: Earth and Jupiter’s moon Europa.

Further studies of Enceladus are a prime goal of Cassini’s “Equinox Mission,” which is now underway and will continue through September 2010.