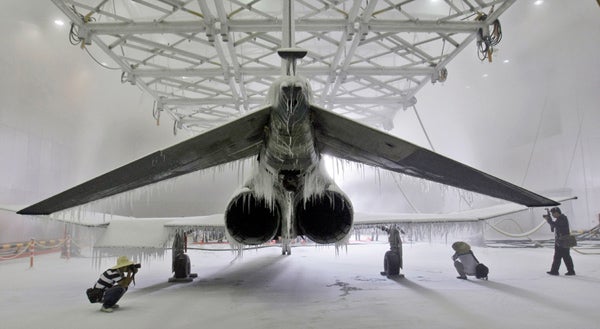 The ice coating is just for effect. Heat from air resistance would melt any ice on planes in-flight.

The South Korean air force showcased its new aircraft testing and evaluation center on opening day, September 8, by coating this F-4 Phantom fighter jet with ice. In the facility, engineers simulate conditions that a plane might encounter at 40,000 feet to determine if the craft’s composite structure—particularly in its wings—can endure the freezing temperatures without cracking.

The test center is the second-largest of its kind in the world. (The largest is McKinley Climatic Laboratory at Eglin Air Force Base in Florida.)

“But you’d never see a plane [flying] like that,” says Paul Lagace, an aerospace engineer at the Massachusetts Institute of Technology, of the plane’s ice-swathed exterior. Even when a fighter streaks by at chilly high altitudes, air friction against the craft keeps the surface significantly warmer than the air around it, he explains. Planes are most likely to acquire ice buildup while still on the tarmac.