Our search for another Earth points back to us 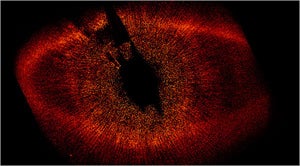 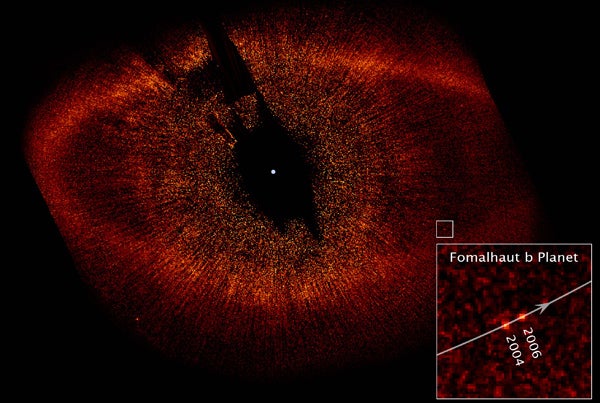 The Hubble Telescope this week captured the first direct visible-light image of an extrasolar planet, Fomalhaut b, which orbits around the Fomalhaut star (at center).

Get ready for more interstellar signposts. Astronomers have directly spotted no less than three planets orbiting a star that sits 130 light-years from Earth. The three gas giants are 10 to seven times the size of Jupiter, with their parent star weighing in at 1.5 times the mass of our sun. Both the Gemini North telescope and W.M. Keck Observatory in Hawaii helped scope out the planets through infrared light.

Another group has claimed the first direct visible-light image of an extrasolar planet. Researchers previously suspected that a planet was disturbing the edge of a debris disk surrounding the Fomalhaut star, just 25 light-years distant. Now the ailing Hubble Space Telescope has taken a snapshot of the planet no more than three times the size of Jupiter – and one billion times fainter than its star.

Astronomers have already found evidence for over 300 extrasolar planets and counting. But those only showed up indirectly through their detectable gravitational and light-blocking effects on parent stars. The new infrared and visible-light pictures give us a first good look at alien worlds beyond our solar system.

All the fuss may still seem strange if none of us will live to see humans reach distant planets – at least not without some far-out technologies. Yet scientists can get excited about the latest images because they represent another step toward finding Earth-like planets orbiting other stars. Such similar planets would give us a basis for comparison on a number of physical features, notably the existence of life.

It’s no real surprise that our fascination with other planets extends from a fascination with ourselves. Perhaps human descendants will eventually reach the distant star systems that astronomers can now only glimpse through telescopes. But if sci-fi storylines such as WALL-E and_ Battlestar Galactica_ give any indication, all roads eventually lead back to Earth.