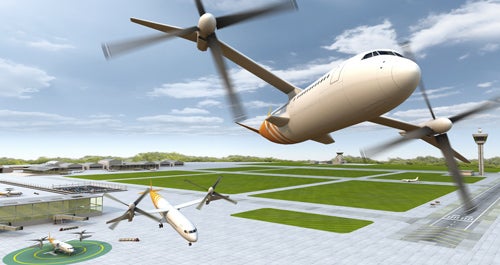 In this age of eternal flight delays, traveling from New York to Miami in the scheduled three hours sounds like a fantasy. Yet within a decade, aircraft designer Abe Karem plans to fix that by bypassing congested runways in his tilt-rotor, vertical-takeoff commercial plane, the AeroTrain. Sitting on a helipad with its twin rotors tilted straight up, the craft can take off vertically and fly like a helicopter. Once the plane has reached a safe altitude of 50 feet, the pilot will tilt the rotors forward and fly the craft like an airplane.

But, you ask, didn’t the military’s tilt-rotor Osprey V-22 claim the lives of 30 people during test flights? Karem, who specializes in designing tilt-rotor aircraft, says he’s learned from those early failures. The AeroTrain adopts the military’s warning system for altitude-stealing turbulence conditions and replaces easily shredded hydraulic control lines with electric motors. And it will use computer software that prevents the pilot from flying into turbulence when landing. “It’s a different animal than the V-22,” says Daniel Schrage, director of the Army Center of Excellence for Rotocraft Technology at Georgia Tech.

Although the 120-passenger plane’s top speed of 410 mph is 20 percent slower than a similar-size Boeing 737, Karem explains that time saved on the ground will make up for that lost in the air, especially on shorter flights. “Two hundred to 1,000 miles, that’s our niche,” he says. Karem aims to have the AeroTrain in production before 2018. Until then, if you’re flying out of a busy airport, you might want to pack a sleeping bag. 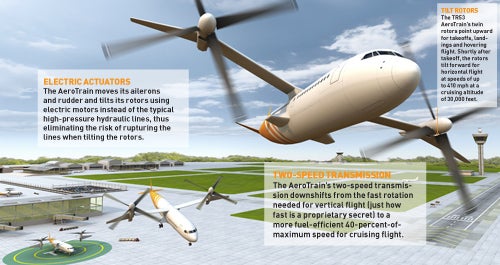 Ready for Lift Off