Carrier craft for SpaceShipTwo makes its debut in Mojave California 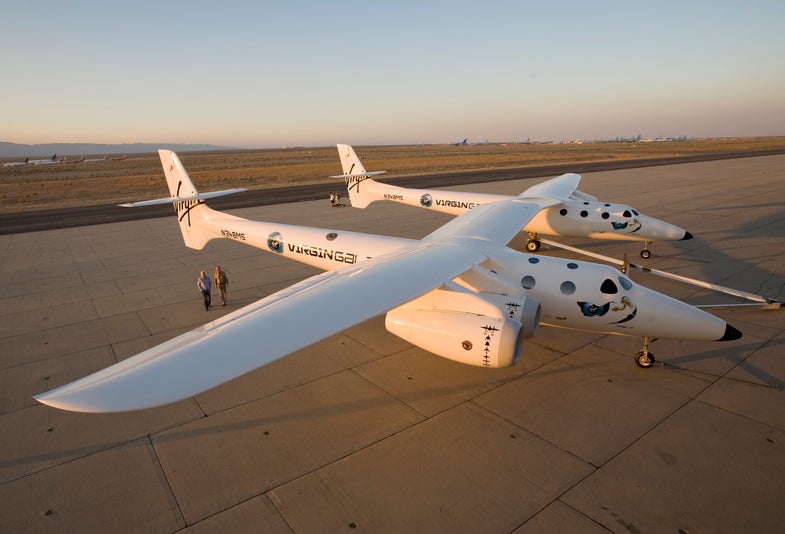 Sir Richard Branson and designer Burt Rutan walk aside the Virgin Mothership "Eve" (VMS EVE) in Mojave, CA. on the eve of its official rollout on July 28, 2008.
SHARE

The White Knight 2 is a four-engine jet that will carry an 8-seat spaceship called SpaceShipTwo to an altitude of 48,000 feet so that the spaceship can drop off and fire its rocket engine for a brief run to suborbital space. Branson’s Virgin Galactic hopes to begin regularly scheduled passenger service to space in 2010.

Rutan’s company Scaled Composites made history in 2004 with the world’s first privately funded manned spaceflights by its three-seat SpaceShipOne, which was carried aloft by the original White Knight. The White Knight 2 features two fuselages, each with its own cabin, connected by a single continuous wing arching between them, where the spaceship will ride. With the wing span of a B-29 bomber, it is the largest all-carbon-fiber aircraft yet built.

On hand to christen the White Knight Two outside a Scaled hangar was Branson’s mother, Eve. Not coincidentally, Eve is also the name of the mother ship. “If you’re going to name a mother ship,” Branson quipped to a gathering of perhaps two hundred reporters and dignitaries, including Apollo 11 moonwalker Buzz Aldrin, “you might as well name it after your own mother.”

Eve Branson stood with her son beside the White Knight 2 as Sir Richard shook a bottle of Champagne and then hosed down a gaggle of reporters photographing the event as he opened it. When asked how she felt having an exotic new aircraft named after her, Eve replied, “I don’t know what to say. But am I allowed to drink this?”

Kidding aside, Branson has serious aspirations for the White Knight 2. Besides carrying paying passengers to space, 270 of whom have ponied up $200,000 each for tickets or put down substantial deposits, Branson envisions White Knight 2 ferrying government, industrial, and academic researchers and their experiments into the realm of weightless flight on a regular basis. Future craft using the White Knight 2/SpaceShipTwo technology could also enable superfast travel from one point on the Earth to another.

The White Knight 2 will begin ground testing tomorrow, with flight testing expected to begin in the fall. SpaceShipTwo is still under construction, with flight testing pending the conclusion of an investigation into the causes of a test stand explosion that claimed the lives of three Scaled employees last summer.

Virgin Galactic president Will Whitehorn said today that the spaceship would not fly passengers until it was absolutely safe to do so. “Safety is our north star,” he said. “Safety is crucial to us because Virgin is invested in four airlines, including Virgin America, in four continents…. Our name has become a byword for safety and innovative and efficient transportation solutions.” That’s a hard-won reputation the hugely profitable group of companies won’t willingly squander.