Milestone In Nigeria: One Year Polio-Free

It’s cause for excitement, but there’s more work ahead 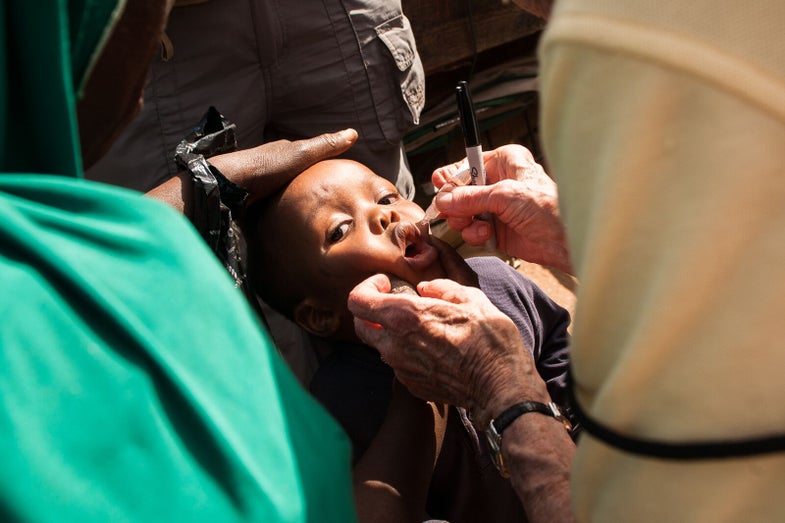 One year ago today, health officials announced the last case of polio in Nigeria. Since then, the country has remained polio-free—one step of many toward an official certification of eradication from the World Health Organization.

As of 1988, there were more than 125 countries harboring polio. If Nigeria is able to reach total eradication, only two countries—Pakistan and Afghanistan—will remain on that list.

If and when polio is entirely eradicated worldwide, it could become the second human disease that we’ve ever been able to wipe out, after smallpox. (Efforts to expunge the Guinea worm are also vying for second place.)

The news from Nigeria is a great step, and comes from a joint effort between the WHO, the Centers for Disease Control and Prevention, the United Nations Children’s Fund, and Rotary International—which together form the Global Polio Eradication Initiative—as well as support from other organizations including the Bill and Melinda Gates Foundation.

But there is more work to be done, according to Carol Pandak, the director of Rotary’s PolioPlus program. “There will be a four- to six-week period where all of the laboratory specimens are still being tested. After those are clears, the WHO would removed Nigeria from the list of polio-endemic countries.”

After that, the immunization campaigns must continue. The country must remain free of polio for the next two years before its status is official. “It’s one milestone. It’s the first step of the process,” says Pandak.

The efforts that go into those campaigns are stunning. Immunization teams, usually four people including two vaccinators, a record-keeper, and a supervisor, set out for hours at a time traveling door-to-door to vaccinate children. It’s challenging to keep the supply chain suitably cold to store the vaccine, which is the oral polio vaccine (also called the Sabin vaccine). According to Tunji Funsho, a cardiologist and Nigeria’s PolioPlus chair who goes into the field around once a month on vaccination teams, some families refuse to vaccinate for religious or political reasons, and require extra discussion and attention.

Ongoing conflicts pose additional—and dangerous—challenges. For example, the terrorist group Boko Haram is active in northeastern Nigeria, which requires extra monitoring. Funsho says that the PolioPlus team has regular contacts in the regions to advise when it is safe for vaccination teams to travel door-to-door. Teams are essentially on call and ready to swoop in as soon as the area is clear. (Similarly, conflicts in Afghanistan and Pakistan, mainly involving the Taliban, remain a big challenge for vaccination teams in that region.]

Despite these challenges, Funsho is optimistic about today’s one-year anniversary, although he acknowledges that more effort is still needed. He says he feels “a lot of relief, a lot of delight. And then a little bit of trepidation, because we still have a lot of work to do be certified as polio-free in 2017. It’s a mixed bag of emotions.”