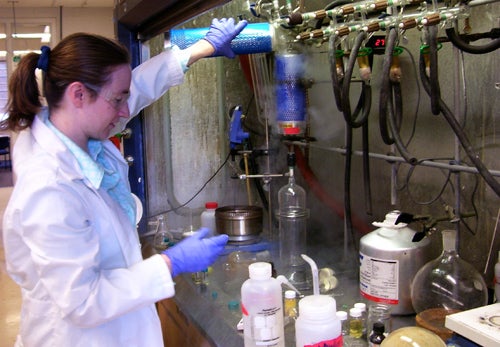 Why are there so many diseases and so few cures? It’s not just that medicine moves slowly; chemistry holds us back, too. To build drugs, chemists start with a base molecule, then add and subtract atoms from it one by one in a sequence of reactions. The process is tedious and wasteful—a 10-step reaction might convert only 8 percent of the starting material into the right end product. And that’s if chemists can make the drug at all.

In her small lab in Ann Arbor, Michigan, Melanie Sanford has engineered a new solution. She’s learned how to transform one of the most basic chemical connections—the carbon-hydrogen (CH) bond, a link so common and stable that chemists shorthand it with a single squiggly line—into “anything that you could imagine,” she says. The discovery has opened up entirely new approaches to molecule-building.

Her main trick is to build puzzle pieces out of catalysts, compounds that drive reactions forward. Throw a catalyst in with your starter molecule willy-nilly, and it will attack the most reactive chemical groups it can find. Intractable CH bonds are usually the catalyst’s last option, but Sanford builds a nanosize structure onto the catalyst that makes it react with only the desired CH bond. The catalyst also contains the chemical group she wants to stick onto the starter molecule, so that when the catalyst strips the CH group away, the new atoms swoop in to replace it.

Her method could make new drugs possible. Fluorine is an attractive drug component because it has unique biological effects and breaks down slowly, but it is extremely difficult to add to or remove from starting materials. Companies typically purchase starting compounds that already contain the element and build off them, but if the fluorine isn’t in the correct spot for a particular drug, chemists can’t move it. Sanford’s chemistry gets around that—she can replace specific CH bonds with fluorine, no problem—and drug companies know it: They’ve invited her to give dozens of talks over the past few years.

Energy companies may soon feel the same way. By changing one CH bond to an oxygen-hydrogen (OH) bond, methane—the primary component of natural gas—becomes liquid methanol, which has roughly the same amount of energy but is far easier to transport. One of Sanford’s next goals is to find ways to make this reaction happen on a million-ton scale. “If we could develop catalysts that would do that,” she says, “it would have an impact on the world right away.”