Meet The Newest Addition To The National Zoo: A Baby Sea Lion 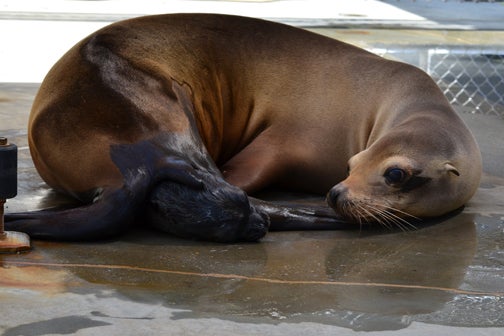 The pup was born on June 26, 2016. It (the sex of the sea lion is still unknown) is a Californian sea lion, one of the few sea lion species that is not currently endangered or threatened.

According to the Smithsonian’s National Zoo, it is the second pup for the 11-year-old mother Calli, and the first for the father, Jetty. Calli and Jetty were chosen to mate through the Association of Zoos and Aquariums’ Species Survival Plan, which matches up potential mates in order to maintain genetic diversity in zoo populations.

Calli was confirmed pregnant via an radiograph (x-ray) on April 20, and zookeepers kept a close eye on her. Zookeepers are monitoring the pup and mother, but are not interfering in the hopes of letting the pair bond.

Sea lions like the pup and her family are remarkably intelligent. They are the only non-human mammal that can keep time to a beat and in the past they have been trained to help search for underwater mines.