People think beef is manly, and that’s a big problem

We can’t lower our meat consumption without rethinking masculinity. 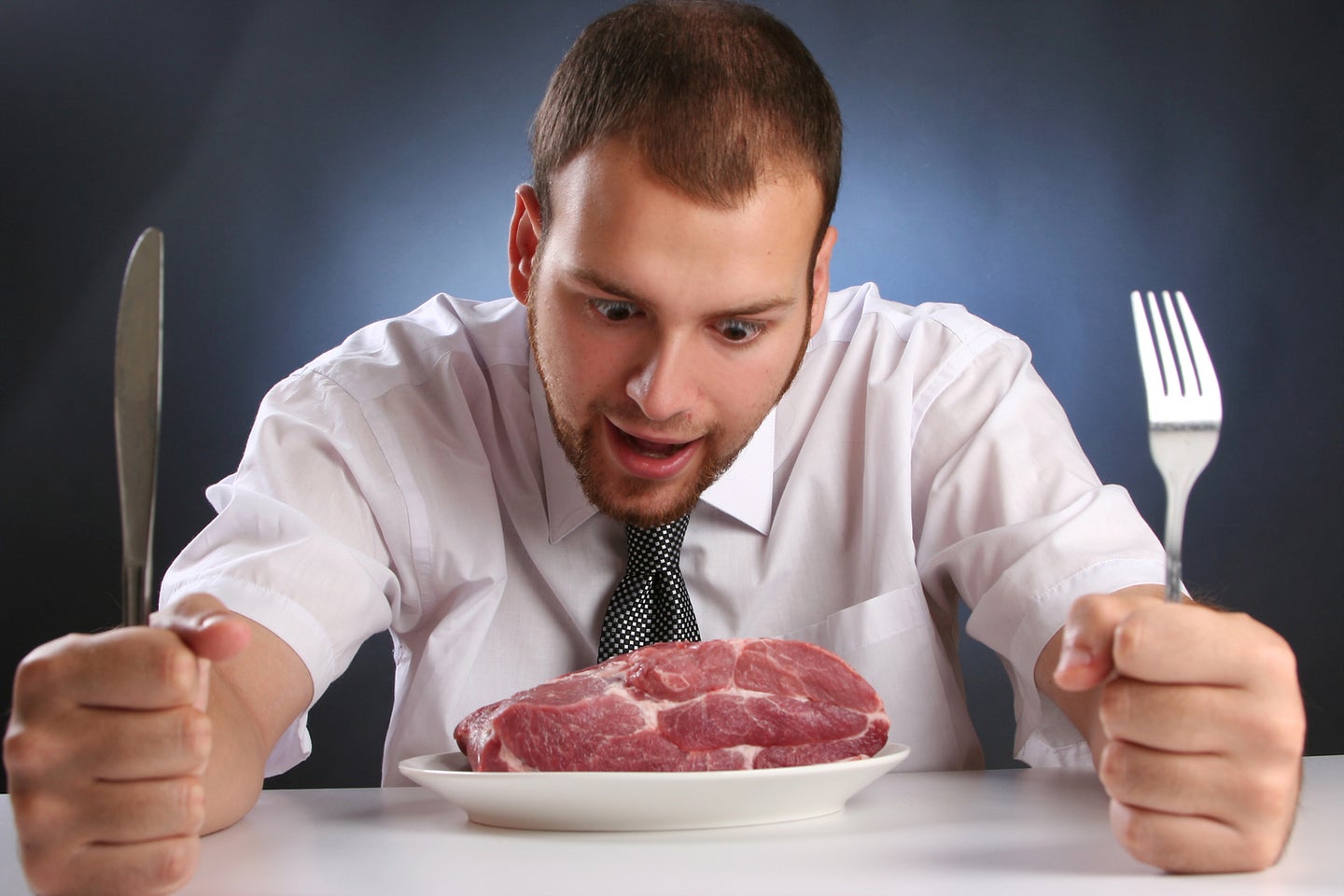 The guy in Burger King’s 2006 “Manthem” campaign for the Texas Double Whopper sits in a fancy restaurant and looks at his food. He’s appalled. The portion is tiny, and for some reason, it comes with a pink rosebud on the side. In a feat of utmost masculinity, he starts singing an altered version of Helen Reddy’s “I Am Woman,” boasting that he can’t settle for “chick food” and needs to eat meat.

The Double Whopper commercial aired more than 10 years ago, but the truth is, stereotypes around meat and masculinity haven’t changed much. To this day, there’s a cultural tendency to link the two together—particularly when it comes to red meat. Scientists have been digging into the connection since the 1980s to see how it adds up to traditional gender roles in different societies. Numerous studies have found that larger portions and unhealthy food are perceived as more masculine, while healthy food and smaller portions are considered more feminine. In fact, a 2010 study by researchers at the University of Toronto found that women tend to eat less in a romantic dinner situation to “make a good impression” on their male partners.

These patterns go hand in hand with other research that’s looked at the way we perceive vegetarians and omnivores, and how that plays out when the binary-gender factor is thrown in. Vegetarianism and veganism are perceived as feminine practices, so when men engage in them, they face harsher judgement.

“People generally are more critical of men who eat plant-based than they are of women who eat plant-based, partly because of the common belief that meat is a ‘man’s food,’ ” says Matthew Ruby, a professor at the School of Psychology and Public Health at La Trobe University in Albury-Wodonga, Australia.

Both genders use descriptors like “less masculine” “physically weaker”, and “less likeable” when talking about men who eschew meat; some women even find them less attractive. Last year Italian researchers from the University of Padova looked at how dietary choices in men affected heterosexual dating preferences. In a series of studies, they found that omnivorous men had more success with women, even when women didn’t present a previous negative bias towards vegetarian men.

“Women are often expected to take care of themselves more; they’re expected to be more compassionate and empathetic. Given that a lot of people don’t eat meat for concern for animals or the environment, that fits into those conceptions of what women should be like,” Ruby explains.

Meanwhile, when men quit meat for ethical or compassionate reasons, Ruby says they get flagged for adopting a feminine behavior that could jeopardize their position of strength and power.

Why do we think eating meat is masculine?

In a time where the gender binary and gender roles have been questioned and debunked, it’s hard to put a finger on what masculinity actually is—and why meat has any role in it. While there’s no consensus on why we associate red meat to masculinity, experts have presented a few tasty hypotheses by bridging ancient societies with modern ones.

No. 1: Men are the providers

The most widespread explanation, first presented by Julia Twigg in 1979, dates back to our hunter-gatherer roots. “In many cultures, hunting was a very male activity,” Ruby says. “Men were the ones going out, doing the hunting, and providing that meat.”

The most successful hunters were often large, strong men who could take on a wild animal and survive. These men were regarded as powerful, and the availability of meat in the community’s meals was a direct reflection of their power.

This association might still be hardwired into our brains, Ruby says, even though “hunting meat” now only requires the strength to tap some buttons and open the door for the delivery guy.

No. 2: Eating meat is a risky business

In sociology, masculinity is described as a precarious state that men must assert regularly and publicly. One of the main ways to do this is by engaging in risky behavior, be that avoiding medical or mental health care, or engaging in risky sexual behavior or substance abuse.

A diet that includes large portions and plenty of red meat, which is proven to be unhealthier than poultry and fish, can also count as a risky behavior. “There’s this association between unhealthy eating and masculinity, that if you’re a real man you shouldn’t be so concerned about your health,” Ruby says.

He’s cautious, though, and clarifies that this is only a possible explanation, given that the idea of red meat being unhealthy is rather new. Only a few decades ago, red meat was seen as a key element of any recommended diet.

No. 3: Meat is a symbol of white-male privilege

According to Carol Adams, a feminist-vegan advocate and author of the book The Sexual Politics of Meat, the myth that you need meat for strength is “traceable to this intersection of colonialism, white supremacy, and masculinity.”

Historically, Adams says red meat was a luxury reserved for aristocrats, who, at the turn of the 19th century, were largely male and white. The bourgeois didn’t hunt or raise the cattle they ate; servants and peasants did all the physical work, though they themselves couldn’t afford to eat meat on a regular basis.

Regardless, Europeans upheld the concept that meat equals strength, masculinity, and ultimately, superiority. Adams notes that the English bragged about how they were able to colonize India because their soldiers ate red meat unlike the native men. She also mentions that in World War II, the US and UK rationed meat at home so that soldiers on the front lines would have more fuel for the fight. The governments also launched a victory-garden initiative using propaganda that featured only women planting and harvesting vegetables.

Though it’s safe to say that the link between meat and masculinity is widespread, its expression varies between cultures. Understanding the nuances helps us to better dissect the stereotypes and learn how to get past them.

That’s no small order, of course. Culture is flexible and changes constantly, but it may take a while to get over entrenched beliefs on meat and gender roles. While feminist and LGBTQI+ movements across the world have forced societies to question their definition of masculinity, the industry has been slower on the uptake. Fast food ads continue to target men with gendered cliches and expectations. “All of these are ways of trying to recuperate something that has already been lost,” Adams says.

The popularity of plant-based diets has, in some part, forced meat-centric companies to invest in vegetarian and vegan trends. Maybe 2020 will be the year Burger King finally revamps its “Manthem” campaign to include a chicken nugget—or even a carrot.