The supercar guzzles less gas than its competitors 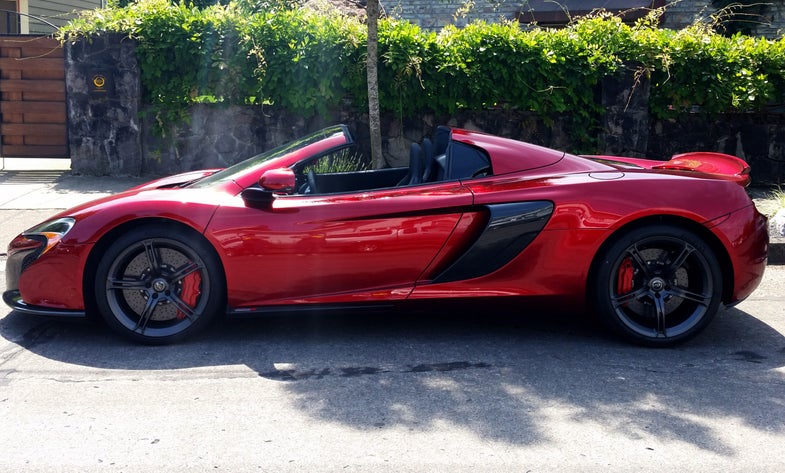 When I looked at the spec sheet that was provided along with the McLaren 650S Spider for a test drive, I noticed a big number 18 in the corner of the sheet. That’s the combined fuel economy of the twin-turbo-powered, carbon-fiber-bodied supercar with a 0 to 62 mph time of 3 seconds flat.

Here’s how that stacks up against other exotic sports cars with eight-cylinder engines:

According to JP Canton at McLaren, this better-than-the-rest rating from the EPA is no accident. The drivetrain was engineered with a view to the future, as this architecture is underpinning the current P1 hypercar as well as the upcoming 675LT and 570S. “We knew we’d be using it for a lot of cars over a long time,” Canton said in a phone interview. So McLaren engineers worked to meet the stringent emissions and CAFE standards of years to come.

It’s worth noting that although the British manufacturer’s customers can probably afford to pay a gas guzzler tax for a car they want, the McLaren 650S Spider doesn’t have one on the invoice. It also helps that the carbon fiber tub of the car weighs about 150 pounds, according to Canton. It doesn’t take much for the twin-turbo V8 to send a car that light to its top speed of 204 mph, or to turn in great gas mileage for the daily commute.

“Our customers are doing multiple times the miles in their 650S than in the competitors’ cars in their garages,” said Canton. “They’re commuting in the 650S, and efficiency matters.”