There Is Probably Liquid Water Right Underneath The Surface Of Mars 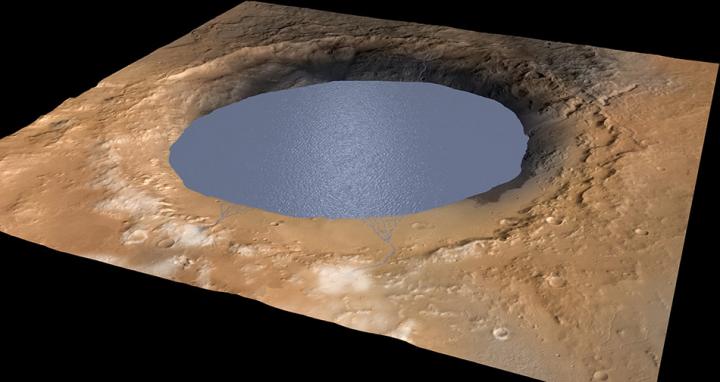 Again and again these days, we’re seeing evidence that our solar system is awash in H2O. Now, after numerous major revelations of liquid oceans throughout our celestial home, it looks as though Mars may have liquid water close to its surface as well.

It’s no mystery that the red planet has water; Mars has two polar ice caps covered in water ice all year round. But for the first time, NASA’s Mars Curiosity rover has found evidence that water could exist in its more life-sustaining liquid state. The little mechanical nomad, which has been roaming around Mars for the past two and a half years, recently discovered the substance calcium perchlorate in the Martian soil. That’s significant given perchlorate’s relationship with water.

Calcium perchlorate can absorb water vapor from the atmosphere given the right conditions. And when it’s mixed with H20, the compound lowers the freezing point of water, allowing it to exist in liquid form at very low temperatures. In this liquid state, the water is considered a brine—an extremely salty solution.

According to Morten Bo Madsen, one of the lead researchers on the paper published in Nature, the Curiosity’s weather monitoring station found that at night and just after sunrise in the winter, conditions are ripe for perchlorate to absorb water from the Martian atmosphere. “When night falls, some of the water vapor in the atmosphere condenses on the planet surface as frost, but calcium perchlorate is very absorbent and it forms a brine with the water, so the freezing point is lowered and the frost can turn into a liquid,” Madsen, associate professor and head of the Mars Group at the Niels Bohr Institute, said in a statement.

The researchers think that since the Martian soil is so porous, the water seeps down beneath the surface, combining with other salts to move below the ground.

The discovery of perchlorate also coincides with new up-close photos that Curiosity took of its home, Gale Crater, showcasing large expanses of sedimentary deposits. Madsen and his team hypothesize that these deposits formed when a bunch of water flowed down the slope of the crater, pooling in the middle to form a lake. The researchers argue Mars was once home to about 6.5 times the amount of water it has now, around 4.5 billion years ago.

If you’re still reeling from NASA’s prediction of someday finding life within our solar system, chances are such a discovery won’t be made on Mars. The Martian environment is too inhospitable and too radiation-filled for housing microbes. But of course, there’s always the possibility of finding life we never quite fathomed before.