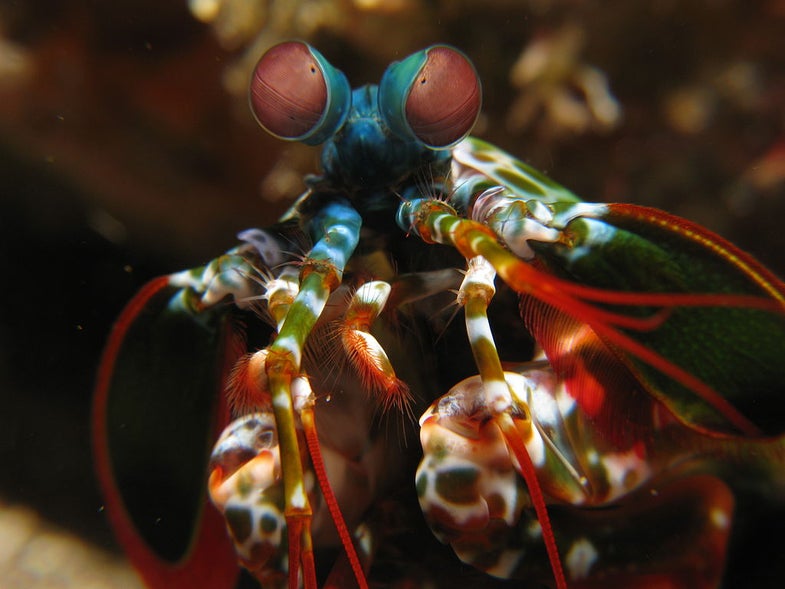 Mantis shrimp roll their eyes to see better, researchers have discovered. Mantis Shrimp, in addition to having the pound-for-pound most powerful punch, can see circular polarized light. This new research reveals that they achieve this super-vision by rolling their eyes. Wikimedia Commons
SHARE

The mantis shrimp, pound for pound, is one of the deadliest creatures in the world. Fabulously bedecked in multicolored armor and killing its prey with the world’s nastiest slap, the animals are capable of seeing more than four times as many colors as humans. On top of all that, we now know they’re sassy as hell.

New research reveals that mantis shrimp roll their eyes to take advantage of their super-powered vision. This comes after the discovery in 2008 that they can see circular polarized light. This, as we explained, is best described “by the effect you get when you put on 3-D glasses and watch a movie in 3-D.” Now scientists know that in order to see their worlds in this 3-D color explosion, they pitch and yaw their eyes around. This movement enhances the polarization contrast so the animals can see underwater objects more clearly. “Intuitively, a stable eye should see the world better than a mobile one, but mantis shrimp seem to have found a different way to see more clearly,” says co-author of the new study on mantis shrimp eye movements, Dr. Nicholas Roberts in a statement.

This discovery could be useful for roboticists looking for ways to develop low-powered, high-performance visual systems for underwater exploration.