Two genes on the X chromosome are all they really need 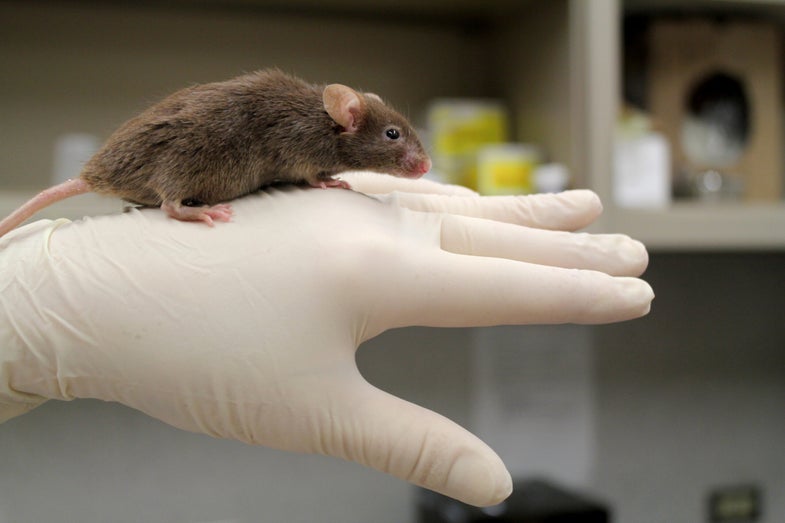 This mouse is over two years old and, oh yeah, has no Y chromosome. Amanda Shell via Science
SHARE

Inside the nucleus of every cell, a mouse has 40 chromosomes (humans, by comparison, have 46). Each chromosome is made of a single strand of DNA wrapped in proteins. The DNA contains the blueprints for the body to produce all the kinds of materials necessary for the organism to live and reproduce–but only one of these chromosomes determines the organism’s sex. If the organism inherits an X chromosome from its father, then it’s female; if it inherits a Y chromosome, then it’s male.

Now a team led by scientists at the University of Hawaii has created several generations of male mice that don’t have a Y chromosome, and they’re even able to reproduce, according to a study published today in Science.

The Y chromosome is passed down with very few changes between generations of fathers and sons. But in recent years, researchers have been working to figure out exactly which genes on the Y chromosome are actually important for normal male development and reproduction. That information would be useful for understanding the evolutionary development of the Y chromosome, and might even lead to new assistive reproductive technologies.

In the study, the researchers modified the genes of male mice to see if they could reproduce. They focused their efforts on two genes they knew were necessary for male reproduction: one called Sry, which is key for the development of the testes, and another called Eif2s3y, which plays a role in producing sperm.

The researchers engineered the mice to not contain either of these genes, instead amping up similar genes on the X chromosome. The resulting mice had deformed testes and produced sperm that couldn’t swim, but to see if the sperm were still fertile the researchers extracted the sperm and fertilized an egg with it in the lab. When they put the fertilized egg in a surrogate mouse mom, they found that nine of the 13 genetically modified mice were able to produce offspring. The researchers then raised several more generations of mice from this line and found they were all able to reproduce naturally–even the males–despite the fact that they had no Y chromosome.

To the researchers, this work shows that genetic code is designed to have redundancies so that organisms can often function normally even if some of their genes don’t work as they should. And though they’re not sure those genetic failsafes would ever be triggered in nature—or whether they’re the same in humans—that information could someday increase or modify human sperm production to address fertility issues.

The researchers also hope that their successful use of round spermatid injection, a reproductive technology currently considered experimental in humans, might lead to future studies that evaluate its utility for infertile males who want to have children.