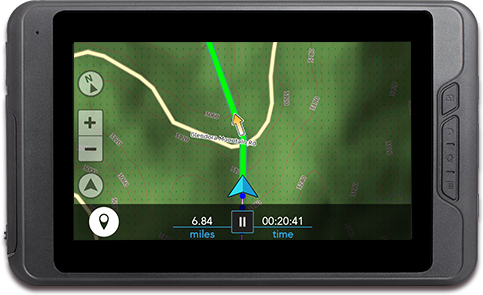 The 2015 Los Angeles Auto Show had lots of new SUVs and crossover vehicles – it was even declared the year of the SUV at the Mercedes-Benz press conference. Some SUVs were big, like the new Mercedes GL; some were introduced by Guillermo from Jimmy Kimmel Live (that’s the redesigned Ford Escape); and some were topless. Range Rover Evoque, we’re all looking at you.

No matter how capable these vehicles may be, the reality is they won’t likely spend much time with their wheels churning through mud and crawling through streams. But for the few that do, navigation experts at Magellan have created the new eXplorist TRX7, a ruggedized GPS navigation system that comes preloaded with more than 44,000 North American trails in 2D and 3D.

But you don’t have to take Magellan’s word as off-road gospel. The TRX7 allows you to record your own trails and share them with other users. Magellan collects the data (as soon as the unit is back in Wi-Fi range) to improve its maps, and awards badges to adventurers who help with real-world reviews of trails. You can find camping and scenic viewpoints, and local off-road clubs are working with the company to verify information to make it less likely adventurers will find themselves stranded. High-centering your vehicle, though, is entirely up to you.

Magellan even makes it less likely that you’ll try some boneheaded move or get surprised in a bad way. The trail rating system goes far beyond the typical 1 to 5 stars, since one person’s good time is another person’s terrifying trail. Users can rate the incline and tilt of the trail, report on the depth of the water crossing, note obstacles encountered, share whether four-wheel drive is required to traverse the trail, and much more. This information not only tells other users how fun or harrowing the trail may be but also lets them know if their vehicle (and their off-road driving skills) are up for the task.

Magellan has been around for a couple of decades; why did it take so long to create off-road GPS? The availability of the data is new, for one thing, and it also took time to design a device that could be ruggedized enough for any off-road vehicle. The 7-inch TRX7 screen is housed in a tough, thick drop-resistant case that can take whatever off-roaders throw at it, whether they’re in an enclosed SUV or in an open side-by-side. It’s even waterproof, so snowmobiles can play too.