Because everything you love is toxic. 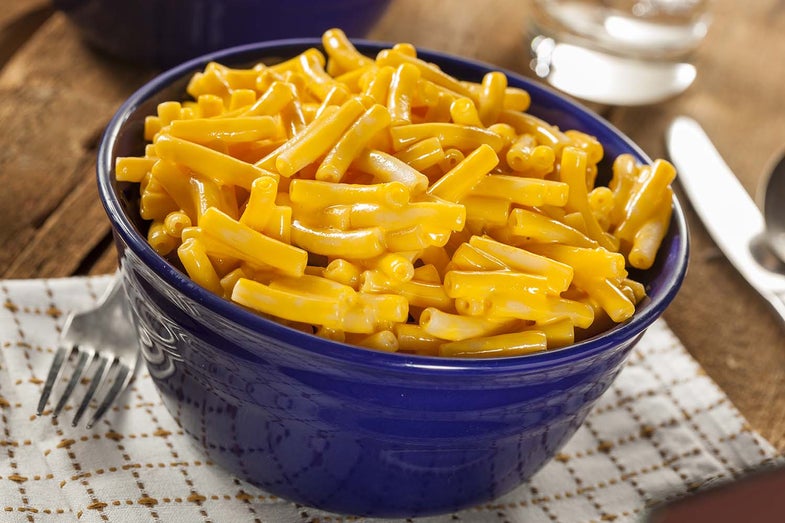 If there’s one meal guaranteed to meet the needs of picky toddlers, harried parents, and broke college students alike, it’s mac-n-cheese. Whether you prefer the classic stuff in the blue box or the organic brand famous for its pasta bunnies, you probably realize that mac-n-cheese isn’t healthy, exactly. But given the fast food alternatives, we tell ourselves, it’s isn’t that bad. And yet, because everything we love is secretly conspiring to kill us, a recent report suggests that each serving of America’s favorite processed cheese food also serves up a hefty dose of phthalates, a class of chemicals increasingly thought to interfere with the body’s hormones. But does this mean that you should give up eating that orange goo?

Phthalates, which includes chemicals such as di(2-ethylhexyl) phthalate (DEHP) and Diethyl phthalate (DEP), help make rigid plastics more flexible and less breakable. In cosmetics, phthalates help chemical components better bind to each other. Unfortunately, a growing body of research links them to genital birth defects, the disruption of some hormones, learning disabilities, and behavioral problems.

Thanks to a 2008 bill, phthalates are now banned in the production of children’s products (like toys). But they’re still abundant. You’ll find phthalates in vinyl flooring, aftershave, nail polish, and increasingly in food, although their presence there isn’t completely understood. It’s thought that some foods packaged in materials containing phthalates (including cellophane, paperboard, and plastics) pick the chemicals up as they sit on your shelves. Tasty.

Before delving into the mac-n-cheese report that is currently making the rounds, it’s important to note that unless you’re raising cows yourself with a feed you’re making yourself (and hand-milking said cow into glass containers), almost all dairy products you consume contain phthalates. In fact, you might do all of the aforementioned dairy farming and still find that your milk contains the chemicals. A 2013 study in the journal Environment International tracked the progression of eight different phthalates through the food chain and determined that basically every step of the milk production process helps introduce phthalates into the end result.

If you’re feeling smug because you don’t consume meat or animal products, you may be discouraged to discover that phthalates are also found in fruits and vegetables (albeit at lower concentrations). This is not a question of a single product being bad, but rather a symptom of an unhealthy food production system.

Which brings us to the mac-n-cheese report, which is not a peer reviewed study. This means that outside scientists haven’t been able to weigh in on the study methods, design, or conclusions. While it was conducted by an independent lab, it was done so at the behest of a host of environmental groups—including the National Resources Defense Council, Earth Justice, Center for Science in the Public Interest and others—under the not-exactly-subtle consortium name “Klean Up Kraft”. Additionally, the report is heavily redacted: the specific brands they tested aren’t referenced, and there are some discrepancies between the report and the summary sheet released to the media. The report, for example, says that they tested 51 samples, while the summary sheet reports that they tested 30. For simplicity’s sake, I’m referencing data from the summary sheet.

The summary sheet says that phthalates were detected in nearly every cheese product tested—29 out of 30—and that average phthalate levels were four times higher in the powdered stuff than in hard blocks and other cheeses. It also reports that the most commonly detected phthalates were Bis(2-ethylhexyl) phthalate (DEHP), which is used to make plastic more flexible, and Diethyl phthalate(DEP), which is most commonly used to bind cosmetics and fragrances. All of which suggests that you should give up mac-n-cheese, right?

We don’t actually know what level of phthalates are safe for consumption, because it’s hard to test the safety of potentially harmful chemicals on humans (would you sign up for that study?). But based on a third-generation reproductive study on rats, the European Food Safety Administration set a safe exposure level of .05 milligrams per kilogram of body weight per day for adults.

Naturally, there are some caveats. The first is that our understanding of phthalates is still evolving, so it’s possible that the acceptable threshold may decrease as we learn more. And it’s true that the important thing may not be how much we’re exposed to, but when we’re exposed to it. An adult who has fully developed is likely less sensitive to the effects of phthalates than a fetus or an infant, whose development can be fundamentally changed by hormonal disruptions.

The United States Environmental Protection Agency (EPA) already sets a much lower threshold for the level of phthalates an infant should consume—just .02 milligrams a day per kilogram of body weight. If your average four-month-old infant scarfed down an entire box of the powdered stuff, he or she could indeed exceed that limit. But if your four-month-old has jumped right from their first taste of solid food to consuming an entire box of mac-n-cheese a day, you probably have other concerns. Your typical two-year-old—a demographic with more cause for concern—would have to eat five boxes to exceed the EPA’s safe dosage. Toddlers may love their powdered cheese, but are they regularly eating thousands of calories’ worth in a single day? Again, we’re concerned, and it’s not because of your tyke’s phthalate exposure.

The real issue is that these chemicals are ubiquitous, so mac-n-cheese is likely not your only source of exposure. If you wear perfume, wash your clothes with detergents containing fragrance, breathe while inside a room with vinyl floors, eat a container of jelly, or chow down on a carton of vegan ice cream, you’re probably getting some phthalates, too.

Just how much these daily activities contribute to your exposure is really hard to tell, which is why EPA estimates have found that everyone from infants to adolescents routinely bypass their recommended threshold. How can we not, given that phthalates have been found in spices, seafood, fruit juice, and beer? The mac-n-cheese report did not test for the presence of phthalates in the macaroni, but it’s likely that they too would have tested positive—phthalates have been found in bread and cereal products as well. Even if you buy products in glass jars, you’re likely getting exposed when you consume them: one study found that glass jars of olives and peanut butter contain phthalates—they migrate from the little plastic gaskets that keep those jars sealed.

The big takeaway? It’s easy to obsess over the things we feel we can control. You can always choose to cut mac-n-cheese out of your child’s diet, and that decision may make you feel like you’re protecting them from toxic chemical exposure. It’s the same reason we rejoice over studies that seem to say coffee helps us live longer or that chili peppers are the latest superfood—we want to believe that we can make choices that are good for us. But the truth is that our food system—and other industries—make it basically impossible to avoid the chemicals used to malign your toddler’s favorite food. So the unsatisfying conclusion, as always, is this: you should probably enjoy everything in moderation.