Part of their new Signature series 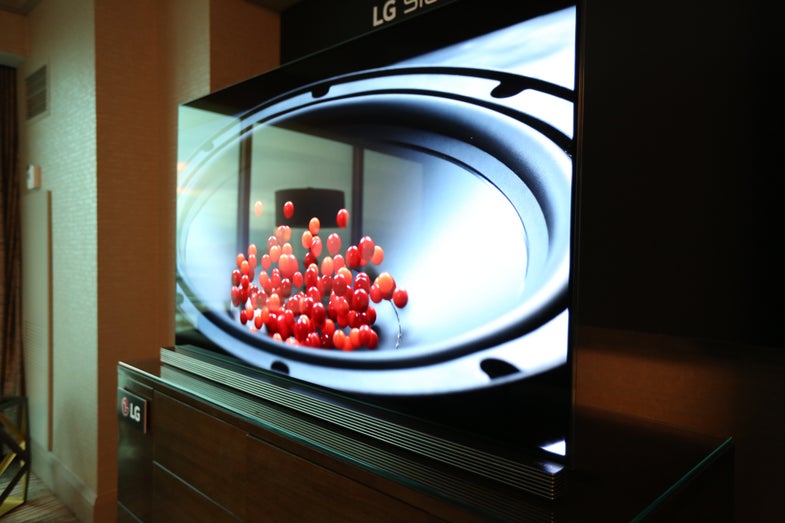 Every year CES brings a new wave of TVs. They’re generally a little better each year, incrementally crawling towards being higher resolution, brighter, thinner, and lighter.

This year, LG tried something new: they took all the internal components out of their flagship TV, the G6, and put those pesky electronics in the base. The result is an unbelievably thin television, that still marches forward with the expected increases overall picture quality.

The G6 is a gorgeous TV in design and execution. You just have to keep walking around to look at it from the side, because it’s almost unbelievable how thin it is. LG measures the entire depth of the screen to be 2.57 millimeters—the thickness of a few credit cards. Their mantra for this design was “eliminate the unnecessary.” Which makes sense, as LG calls the display picture-on-glass. And that’s exactly what it is.

A thin TV is nice, but a television is only as good as its picture. And LG nailed it with this year’s models. Their OLED displays, while more expensive than a bulk of the competition, are unparalleled when it comes to the richness of blacks, reduction of light leakage, and mega-wide viewing angles. The TV can also display more than a billion colors, with a 10-bit color depth. The G6 supports high-dynamic range video, which is quickly becoming an industry standard, and is obviously a 4K monitor.

The internal components, located in the base, can fold up behind the monitor so the TV can be mounted on the wall. The attached sound bar offers an impressive amount of audio, and has speakers that face two ways. If the base is in use supporting the TV, sound is thrown forward and upwards. If the base is tucked behind the display, the sound bar hangs under and emits sound down and forward.

This TV is a part of LG’s new Signature series, which is their line of ultimate home appliances. Also included in the lineup is a washing machine, refrigerator, and air purifier. These products don’t just represent use cases, they represent ideas. With the air purifier, LG is chasing the grander idea of purity in the home, and their refrigerator aims to embody freshness.

The devices will be available in Spring 2016.