Defy The Cable Company With A DIY HDTV Antenna

Stick it to the man 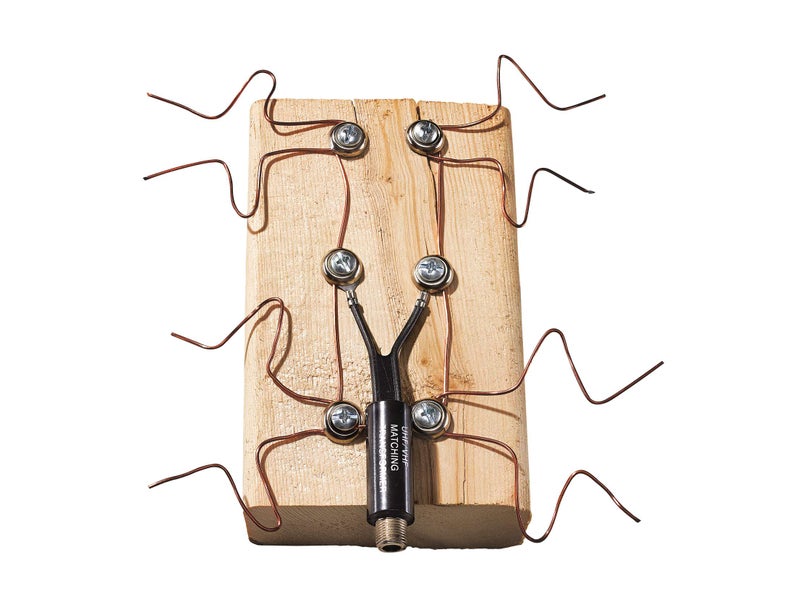 This fractal antenna can be assembled in an hour or less. Photograph by Jonathon Kambouris
SHARE

Frustrated by years of expensive cable bills, Norm Sutaria ditched his set-top box and used online instructions to build a homemade HDTV antenna. Then the education specialist shared his newfound expertise with a class at Brooklyn Brainery, a crowd-sourced education space in New York City. Popular Science sat in to learn how to nab affordable, high-resolution television.

Students in Sutaria’s class built either a 32-inch “bow tie antenna,” reminiscent of the classic rabbit ears, or an eight-inch “fractal antenna,” pictured here, which is more compact and slightly harder to make.

Both designs were simple: a few pieces of copper wire arranged on a block of wood using nails and washers. The wires pick up HDTV signals and send them to the television via a matching transformer.

Sutaria explained that the electromagnetic waves that make up HDTV signals vary from 174 to 806 megahertz, falling within the spectrum of radio waves. In this span, each TV station has a unique range.

Wires must have the right length and position to pick up the waves. Trimming them and adjusting their positions by bending them forward or backward can optimize the antenna for your location.

This article was originally published in the March 2015 issue of Popular Science, under the title “Learn To Defy The Cable Company.”