Arctic researchers rely on a fleet of unmanned aircraft 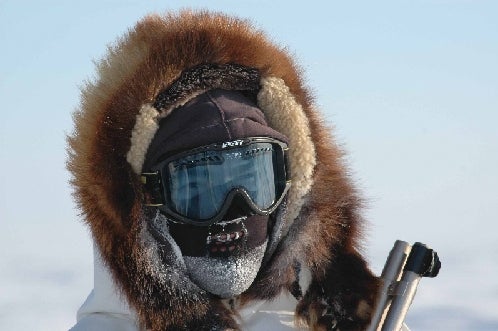 The thought of studying sea ice conjures up visions of scientists wrapped in expedition-weight parkas straddling dangerous ice cracks to take measurements. And when it comes to on-the-ground fieldwork, that image isn’t far off base. But in recent years, a remote-controlled robotic plane has made work conditions a bit more tolerable for researchers who study the ice.

Unmanned aerial vehicles (UAVs) were used to take aerial photos as early as the 1970s, but it wasn’t until 2000 that they began to play a role in studying the physics of sea ice.

And in recent years, Arctic sea ice has become a key variable in global climate change.

During the 2008 melt season, Arctic sea ice extent dropped to the second-lowest level since satellites first began taking measurements in 1979. The record-setting low occurred in 2007, but that’s a measure only of its extent, not of its quality. According to Walt Meier, a research scientist at the National Snow and Ice Data Center in Boulder, Colorado, it’s important to look not only at how much ice covered the Arctic, but also at the condition of the ice.

Multi-year ice is sea ice that has survived at least one melt season and is typically 2 to 4 meters (6.5 to 13 feet) thick. First-year ice has accumulated over only one season and is much thinner. “When you have a large amount of first-year ice, you have an ice cover that is much more prone to melting the following summer, and that’s what we saw in 2008,” said Meier.

According to Meier, about 40 percent of the ice in the Arctic is first-year ice — the rest is older, thicker multi-year ice, which is more difficult to melt and tends to stick around longer. But in March 2008, thin first-year ice covered a record 73% of the Arctic Basin, which set the stage for more widespread melting in August and September. “The ice that remained at the end of the 2008 melt season was only about half a meter thick, whereas last year there was a lot of multi-year ice,” said Meier. “2007 and 2008 were very clearly the lowest ice volumes and the lowest ice extent in the satellite record. We can say that with absolute confidence.”

Knowing what kind of ice covers the Arctic region is key to understanding the sea ice minimum at the end of each melt season. During the past three decades, satellites have enabled scientists to monitor sea ice cover from space. But the minute details of sea ice physics happen rapidly and continuously — something that satellites can’t capture.

“Sea ice changes fast, and if you only see it once every few days, you miss quite a bit,” said Jim Maslanik, research professor in the Department of Aerospace Engineering Sciences at the University of Colorado.

Beginning in 2000, Maslanik and a team of researchers started flying Aerosonde UAVs out of Barrow, Alaska, to gather data on sea ice conditions as part of research funded by the National Science Foundation. Since then, he says, the conditions have changed dramatically. “When we first started doing flights out of Barrow, the oldest ice was fairly close to Barrow’s coastline. In the past several years the ice has retreated so much that we would have to fly hundreds of miles out to see that older, multi-year ice,” he said. 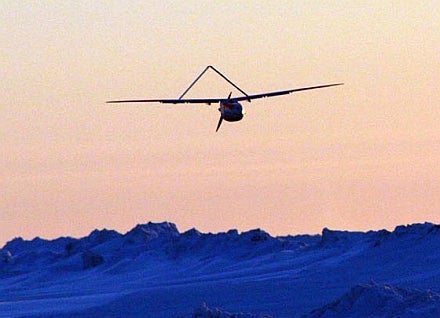 An aerosonde comes in for a landing after completing a mission.

In addition to improved temporal resolution (how often they can pass over the same location), UAVs offer other advantages. They can fly over areas that are both difficult and dangerous for humans to get to on the ground, which enabled Maslanik’s research team to gather data on conditions they couldn’t have otherwise accessed. They can also soar under cloud cover — a major limitation of satellites — and they can fly up to 20 hours on a single mission. “We can have multiple aircraft at our disposal, and they can go to places where the ice is changing,” said Maslanik. “These are rapidly evolving conditions that are difficult to see by any other means.”

The UAVs carry a suite of instruments, including a video camera, a laser system that provides surface topography profiles, and GPS for determining aircraft position. “We’re able to combine surface mapping with aerial photography, and we get information about surface roughness, ice thickness, reflectance, and surface temperature,” said Maslanik.

After the record minimums of 2007 and 2008, researchers will be watching the 2009 sea ice outlook closely. “We’re heading towards an Arctic that won’t have any summer sea ice in 20-30 years — the most recent research indicates that the last time that happened was at least 5,500 years ago,” said Meier. “To get back to the sea ice levels we saw in the 1980s would take several very cold winters in a row.”

Next June, Maslanik and his colleagues plan to fly UAVs out of Svalbard, an archipelago in the Arctic Ocean, to collect sea ice data for the 2009 melt season for a NASA-sponsored study. Svalbard is an ideal launch point because of its location relative to sea ice movement. “By flying out of Svalbard we essentially have a conveyor belt that brings the sea ice from the central Arctic Ocean southward past Svalbard. This means we can access different types of ice much more easily,” he said.

The UAVs will enable the team to remotely observe the rapidly changing sea ice conditions as they happen, which will give them much finer details about how the ice evolves — and all via clicks on a remote-control device.

Maslanik recalls standing on the edge of an ice crack in the Arctic Ocean a few years ago trying to observe the how fast the ice opened up and what the effects of the open water were on the atmosphere. “These things change in a matter of minutes,” he said. “If we’d had a UAV, we could have flown it back and forth over the area to get surface and air temperatures, humidity, and wind conditions. And I could have been sitting in a nice warm hut.” 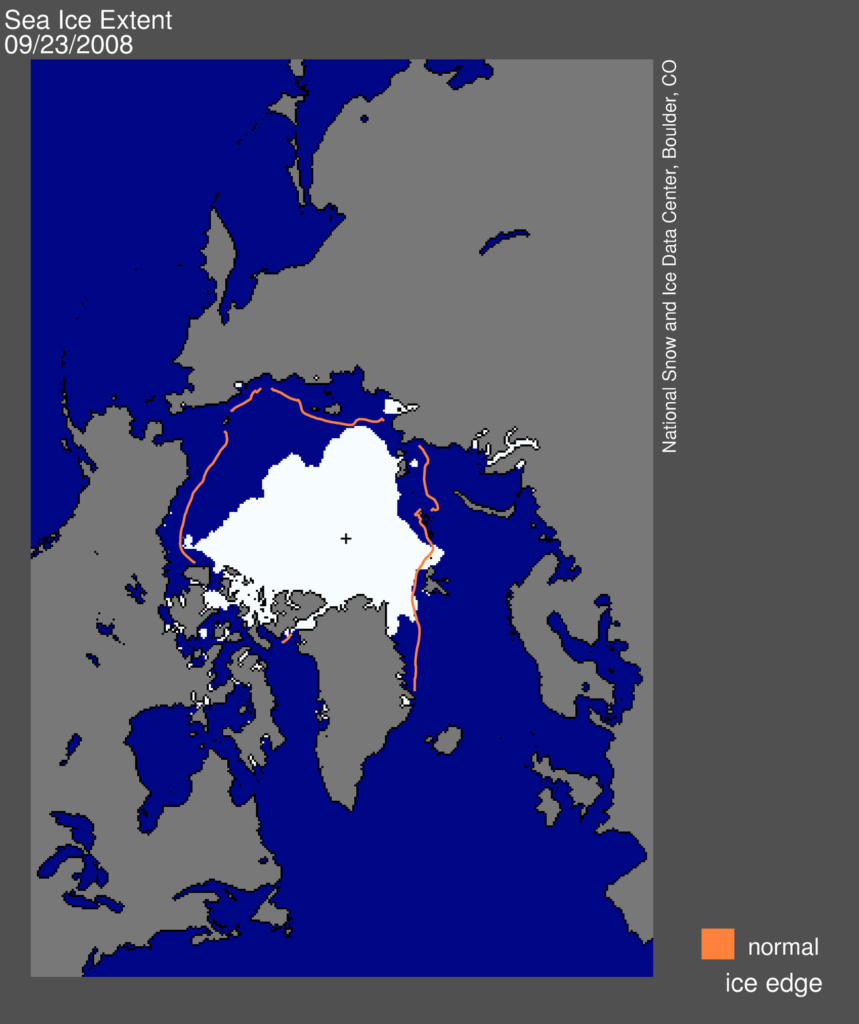 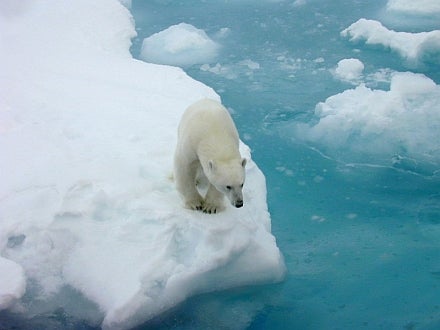 Declining sea ice in the Arctic threatens species whose survival depends on the ice, such as polar bears. 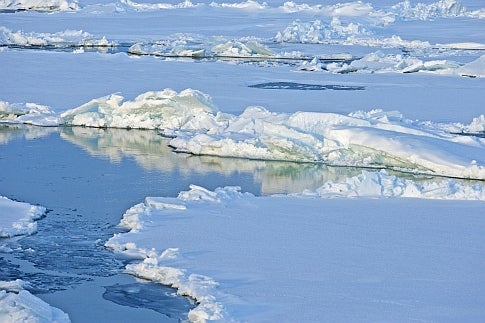 The aerosonde is a small robotic aircraft designed for environmental reconnaissance over remote areas and in harsh conditions. 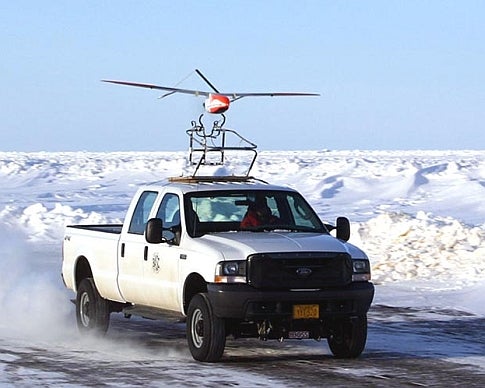 An aerosonde is prepared for launch.

An aerosonde comes in for a landing after completing a mission. 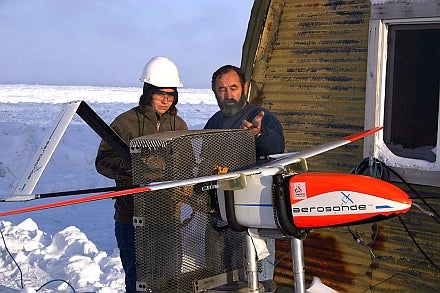 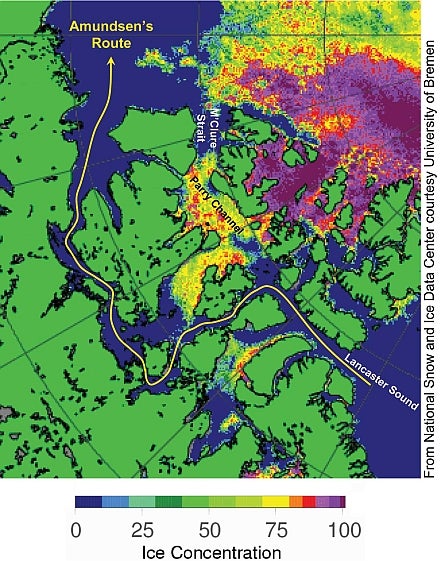