Canada is losing its ice 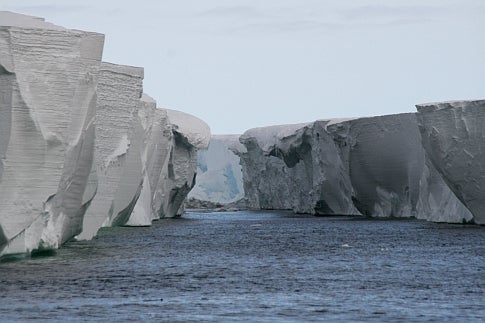 Scientists say Arctic ice shelves located along the northern coast of Canada’s Ellesmere Island have undergone massive changes during the summer of 2008. In July, a large section of the Ward Hunt Ice Shelf — the largest in the Canadian Arctic — broke off from Ellesmere Island. The entire Markham Ice Shelf broke away in early August and is now adrift in the Arctic Ocean. And two large sections of ice detached from the Serson Ice Shelf, reducing its size by 60 percent.

More than 90 percent of Canada’s ice shelves have been lost during the last 100 years. Although much of the loss occurred during a warm period in the 1930s and 1940s, Arctic temperatures are now even higher than they were then, and a period of renewed ice shelf breakup began in 2002. In April 2000, satellite images indicated that a large crack had developed in the Ward Hunt Ice Shelf; by 2002 the shelf had completely split in two.

“These substantial calving events underscore the rapidity of changes taking place in the Arctic,” said polar scientist Derek Mueller of Trent University. “These changes are irreversible under the present climate and indicate that the environmental conditions that have kept these ice shelves in balance for thousands of years are no longer present.”

All told, this summer’s ice shelf loss totals about 83 square miles — more than three times the area of Manhattan Island. Because ice helps cool the Earth by reflecting the sun’s energy back into space, loss of Arctic ice could contribute to a faster warming of the global climate. In addition, scientists say unique ecosystems that depend on the ice are on the brink of extinction.