Drilling in Chukchi Sea is almost at an end 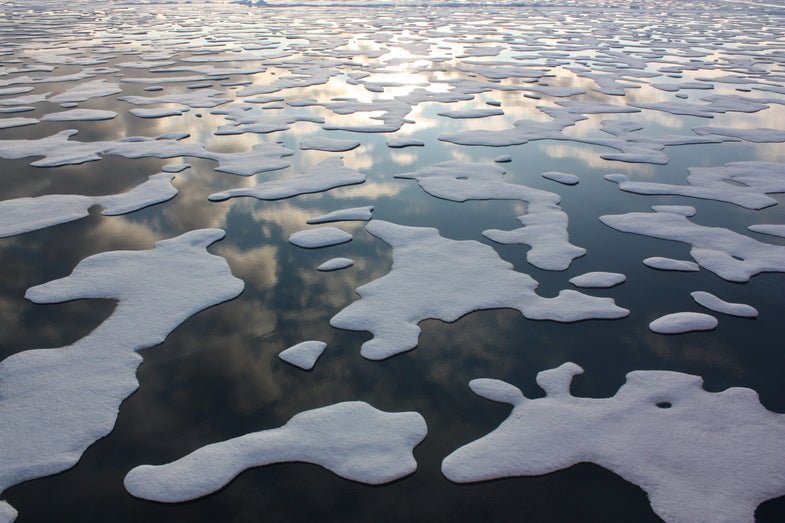 On July 20, the U.S. Coast Guard Cutter Healy steamed south in the Arctic Ocean toward the edge of the sea ice. The ICESCAPE mission, or "Impacts of Climate on Ecosystems and Chemistry of the Arctic Pacific Environment," is NASA's two-year shipborne investigation to study how changing conditions in the Arctic affect the ocean's chemistry and ecosystems. The bulk of the research takes place in the Beaufort and Chukchi seas in summer 2010 and 2011. Credit: NASA/Kathryn Hansen NASA image use policy. NASA Goddard Space Flight Center enables NASA’s mission through four scientific endeavors: Earth Science, Heliophysics, Solar System Exploration, and Astrophysics. Goddard plays a leading role in NASA’s accomplishments by contributing compelling scientific knowledge to advance the Agency’s mission. Follow us on Twitter Like us on Facebook Find us on Instagram.
SHARE

The last oil and gas company remaining in the Alaskan Arctic region of the Chukchi Sea has abandoned 55 of its drilling leases, and has announced that it will abandon the remaining 38 by next year.

Repsol, a Spanish oil company, was one of the largest lease holders in the area. The company spent $15 million in 2008 for half a million acres.

This move follows the withdrawal of all other oil and gas companies in the region, apart from one lease held by Royal Dutch Shell. ConocoPhillips, ENI, Iona Energy and Shell have all left the region.

After a boom in the 80s and 90s, and a subsequent boom between 2003-2008, companies have discontinued exploration and drilling due to a slew of problems. Particularly, the price of staying in the region was astronomical because of long hours of darkness, as well as year-round pack ice and icebergs.

Seventy-one leases still remain in an adjacent Arctic region, the Beaufort Sea, north of Alaska, which has more coastal infrastructure access. Many of those leases are close to expiration, with no immediate plans for continued development.

The companies have also come up against a large amount of opposition from many nonprofit organizations and Democratic party leaders. Most disagree with drilling to the possible environmental impacts, especially from potential spills. In 2011, the United States Coast Guard admitted that there was no action plan if a spill were to happen in the Arctic. NOAA is still studying and testing to create a plan.