A Laser Cloak Could Shield Earth From Aliens

The answer is always lasers 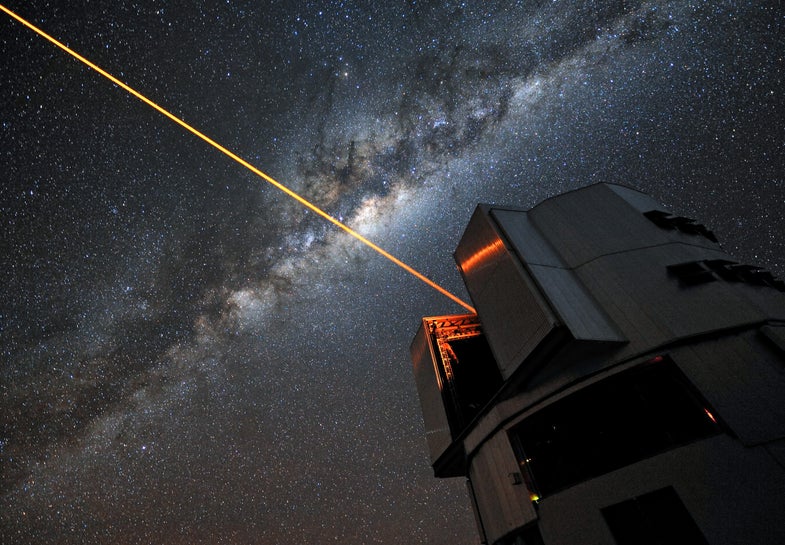 Both science fiction and some really smart people (such as Stephen Hawking) have cautioned against trying to contact aliens. What if the aliens’ vast technological superiority allows them to destroy Earth or enslave humanity? That’s why current efforts to find alien life involve merely passively looking or listening for it, never quite broadcasting our whereabouts.

But what if our planet is broadcasting our location merely by orbiting the sun? The Kepler space telescope has discovered thousands of exoplanets by watching for the shadow a planet creates as it passes in front of its star during orbit. If otherworldly civilizations are also looking for life, they might notice our planet doing the same thing. They might also notice that our planet orbits its star at just the right distance for liquid water to form on its surface–something we humans assume is necessary for life to develop. If they’re anything like humans, they’ll want to come and investigate.

Well, two astronomers from Columbia University have a potential solution to that scenario: We could cover our tracks using lasers.

David Kipping (a Popular Science Brilliant 10 award winner) and his co-author have calculated that, instead of letting our planet’s shadow cross the sun, we could shoot a laser beam into the eye-like organs of any aliens that are potentially watching.

The laser cloak could be as simple as firing a 30 MW later for about 10 hours per year during the time frame when we might be crossing the field of view of an alien civilization. That laser would compensate for the loss of brightness, and could be powered using less electricity than it takes to power 40 American homes.

To make an even better cloak, we could use a laser that replicates all the different wavelengths found within sunlight. That would require a 250 MW tunable laser and significantly more power.

“You can even go further and use these tunable lasers to cloak just the biosignatures of the Earth, making our planet look like a boring dull lifeless world (that costs only a couple hundred kW of power),” Kipping wrote in an email statement.

Or, he says, if you’re not the paranoid type, the same lasers could be used to broadcast our presence to the aliens, by putting out a signal that looks very artificial.

Other civilizations, if they’re out there, might have had the same thought, says Kipping, and that could give us a clue as to how to find them. “We think it is seriously worth looking through the Kepler data for artificial transits, given how easy they are to generate.”