Kindle Oasis 7-inch review: tougher, smarter, and not for everyone

Amazon's first waterproof e-reader is ready for the beach and bathtub, but not your bed. 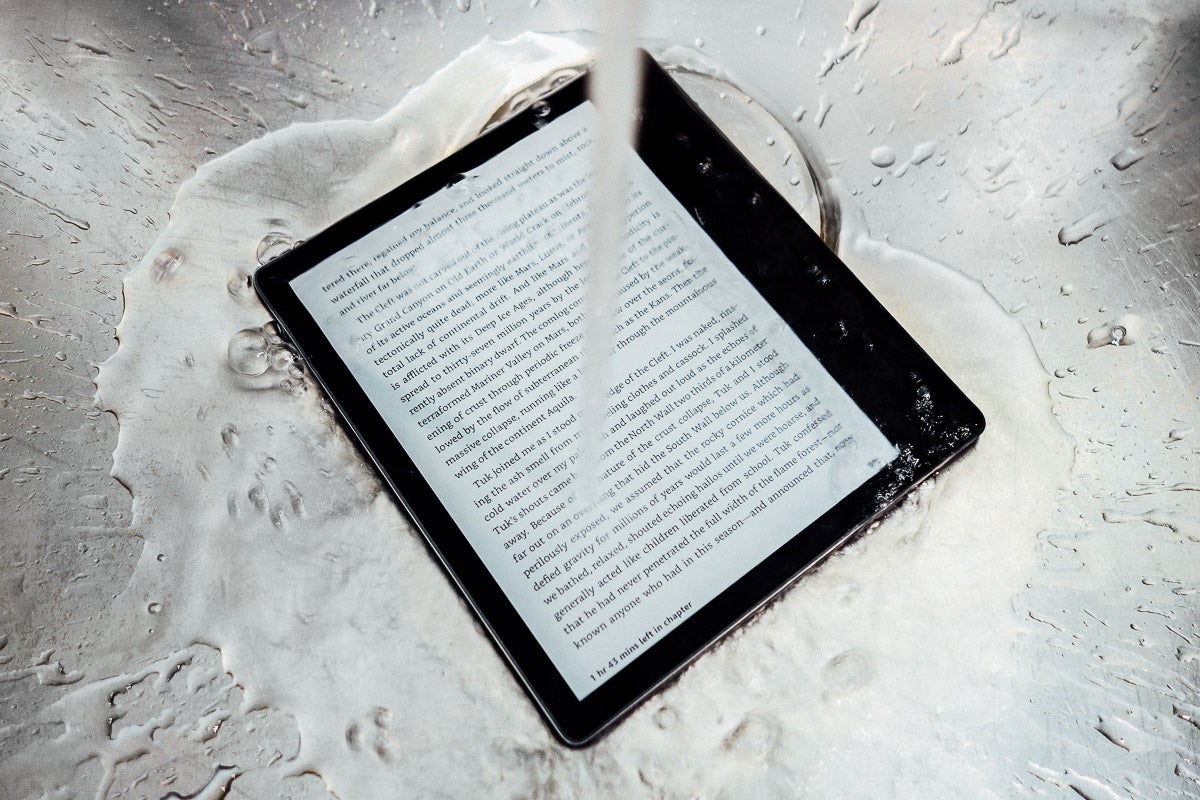 The first book I read on an e-reader was Cryptonomicon, the Neal Stephenson epic. I kept falling asleep while reading the 931-page paper version, and it would hit me in the face. I read myself to sleep and that is what happens, but this massive tome would sometimes crack me in the face so hard that it would leave a mark.

So I picked up an e-reader, one of the early Sony models. From that moment, I was in love with the tech. Your opinion is your own, and I respect it. Now that I’ve said that, I will abuse this website and broadcast mine: e-readers are better than books. They make it easy to bring multiple volumes with you anywhere, and a backlit e-ink screen is like a printed page that glows—as opposed to your phone or tablet screen, which is like reading on a TV. Many are even waterproof. Huzzah, I’ll be in the tub. Don’t bother me for at least two hours.

Amazon’s 7-inch Kindle Oasis is the everything-giant’s first waterproof reader, which is a big deal for people go to the beach/pool/rainy place and don’t want their $249 portable library to get trashed by the most common substance on Earth. It’s not, however, the first waterproof reader. Kobo has had a fear-no-h20 unit for a while now, and you can even get a specially treated Kindle Paperwhite (three models old now) from a company called Waterfi.

So, OK, Amazon’s got a waterproof reader tied to the most expansive ebook library in the world. Game over, everyone pack up their e-reader businesses and go home, right? Maybe? Probably not? For all its great features, the newest Kindle Oasis is not a perfect machine.

The new Oasis now sports Bluetooth, which is awesome for those of us who switch between audiobooks and ebooks. Software-wise, Amazon started making that super easy by syncing between Kindle and Audible earlier this year; pick up an audiobook, and Amazon will throw in the ebook version, automatically jumping you to the spot where you stopped listening. So throw on your wireless headphones, toss your Kindle in your bag, and pretend you’re actually working at your desk. This will drain your battery faster, but at least you’re not killing your phone just because you can’t wait to find out if John Adams gets elected president. (He does, but only once.)

In terms of other radios, the Oasis, like its forebears, ships with two connectivity options: Wi-Fi only (from $249, with ads, which you will never notice), and Wi-Fi and cellular ($349), which uses LTE where available. You get the LTE one if you don’t care about money or can’t ever find Wi-Fi. Honestly, this is a luxury add-on, but damn is it nice.

On the processor side, e-readers are not powerful machines and the new Oasis doesn’t do much to change that. Like its predecessor, it uses a 1Ghz processor, although the 7-inch Oasis’s is an updated chip: an NXP i.MX7D vs a the original’s FSL 6 SL Cortex-A9. The new chip lets the 7-inch Oasis run faster; side-by-side with the 2016 model, the new kid flips pages quicker. (Menus, keypresses, etc, seem to fire with the same speed.) Its light sensor, which adjusts the screen’s brightness based on the ambient illumination, though, is so fast it’s almost annoying. If you, for example, roll over in bed to grab a glass of water and subject the Oasis to a brighter cone of lamplight, the 7-inch Oasis will lighten its screen almost instantaneously. If dials it down when you roll back over, though.

The screen in general is outstanding. Who misses paper? While older generations of e-ink screens could look pixelated, letters and words on the new Oasis are as clear as any wood-pulp sheaf. It’s not visibly better than the previous-gen Oasis or the two-generations-ago Voyage, and sports the same 300 pixel-per-inch density. It is, however, larger than both of its predecessors, which is great for a couple reasons: first, it’s excellent for readers with poor vision. The Oasis (as well as older models) support eight fonts at 15 sizes apiece, which should make it easy to read even if you’ve graduated beyond the drugstore carousel of corrective spectacles. The larger screen should also translate into fewer page-turns, helping extend battery life—a claimed six weeks at 30 minutes of reading a day. (We did not have six weeks to review the 7-inch Oasis, but in four days of heavy use the battery meter barely budged.)

That large screen, though, means a large form-factor overall, and this is an area where the Oasis disappoints a bit. Up until this generation, Amazon had a great track record of releasing smaller, lighter Kindles every time. The new Oasis is neither smaller nor lighter than the 2016 model.

The weight is not much to complain about—at 6.8 ounces, it’s just a couple ounces above last year’s (4.6 ounces)—but the size is annoying. At 6.3 x 5.6 inches, it’s nearly square, and one that’s hard to wrap your fingers around. Amazon says its device was designed to rest in your palm, and it does. But not everyone wants to read sitting or standing up all the time.

Unfortunately, the Oasis is not particularly comfortable to hold while lying down. The best method I’ve found is to pinch it between your thumb and forefinger below the page-turn buttons, and either slide your thumb up or use another hand’s digits to advance. Here you actually start to feel that metal body’s extra ounces; the previous-gen Oasis is a better choice if you like to read while lying down. It’s smaller, so you can easily get your hands around it.

Actually, if you read in bed a lot, just go for the Voyage. It’s easier to grip than either Oasis and only 6.6 ounces, or 0.2 ounces lighter than the 7-inch Oasis. It’s better for people like us. It’s not naturally waterproof, but if you want to read lying down at the beach, a Ziplock bag works great. I just saved you a hundred bucks. I’m on Venmo.

It feels like everyone who reviews the new Kindles says the same thing every year: If you need a Kindle, get this new one, but there’s no reason to upgrade if you’ve got last year’s. The addition of Bluetooth and that IPX-8 water-resistance (up to 6 feet for 60 minutes—more than an iPhone, whose Kindle app is garbage) are clearly efforts on Amazon’s part to change that trend with the 7-inch Oasis. For some people, this is the Kindle they’ve been waiting for; it’s certainly an excellent reader and boasts a set of specific features that will appeal to specific people. For others, it might not be enough of an upgrade to justify the expenditure. Sounds confusing, I know. Don’t worry: We made a cheat sheet for you:

YOU SHOULD GET THE NEW OASIS IF

YOU SHOULDN’T GET THE NEW OASIS IF