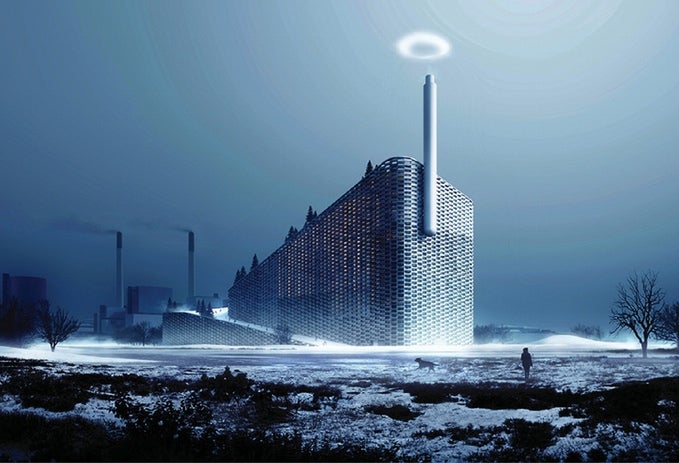 We know that carbon dioxide levels are rising and that these rising levels are linked to increased temperatures. But actually visualizing how much carbon dioxide (CO2) is going into the atmosphere is a bit of a challenge. Even tons of an invisible gas are still, well, invisible.

One new power plant is aiming to change that. Copenhagen’s new waste-to-energy plant, the Amager Resource Center built by the Bjarke Ingels Group will have both a ski slope and a rock-climbing wall on its modern exterior, while inside, household waste is incinerated and turned into energy. It’s a relatively clean process, but still one that generates CO2.

To emphasize that, the architects have decided to install an art installation that will blow a nearly 70-foot-wide steam ring from the plant’s smokestack every time a ton of carbon dioxide is generated by the plant.

The smoke ring is intended to be a visual and visceral reminder of the true environmental cost of this kind of energy. The team funded two smaller models (which both worked!) themselves, but have turned to Kickstarter to raise $15,000 for a 1/3 scale model of the steam ring generator.

The plant, and art installation are expected to be completed by 2017.