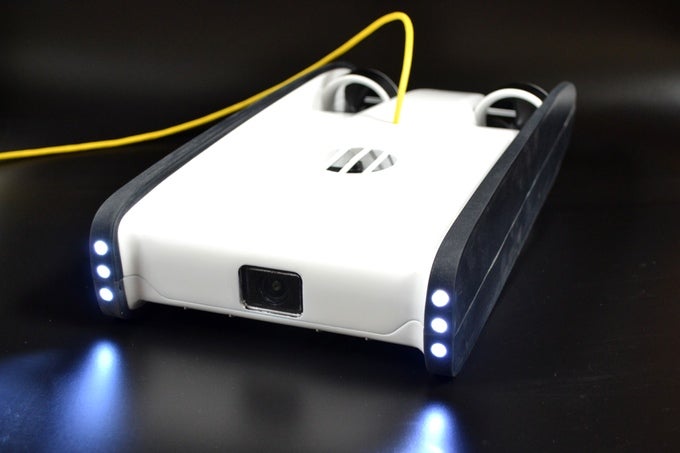 Call it the son of submarine. In 2012, the first OpenROV tethered unmanned underwater robot, also crowdfunded on Kickstarter, combined the utility of a cheap submarine with the form factor of an off-brand iMac. For their return to crowdfunding, OpenROV’s Trident packages several improvements in a slick, white-and-black body. With under two days left before the project closes, they’ve already raised over $760,000 of their initial $50,000 goal.

Because radio signals don’t travel well through water, Trident is, like many unmanned submarines, a tethered vehicle. The robot will ship with a cord that’s 82 feet long, but given a longer cord the makers say the body can work at depths of over 300 feet. Trident has a top speed of about 4 mph and can run on battery power for 3 hours. The robot itself is almost 8 inches wide, 16 inches long, and 3 inches thick. The drone has two thrusters in the back, and a third nested in the middle of its body for gentle vertical maneuvering under water. On its face there’s an HD camera and LED lights. The basic model costs $1,200, and a fleet of five are bundled at $3,700. Each comes with a buoy that can transmit data between the user and the Trident wirelessly.

Apart from the fancy new body, Trident is driven by the same open source software that powers the OpenROV project’s earlier sea drones. For people interested in underwater photography and exploration, Trident is probably a fine tool and a fun toy. Its creators describe its movement underwater as like flying. Now, if only they can find a way for it to fetch beer.