We finally have the Juno spacecraft’s first results on Jupiter

Here are eight surprising things NASA has learned so far. 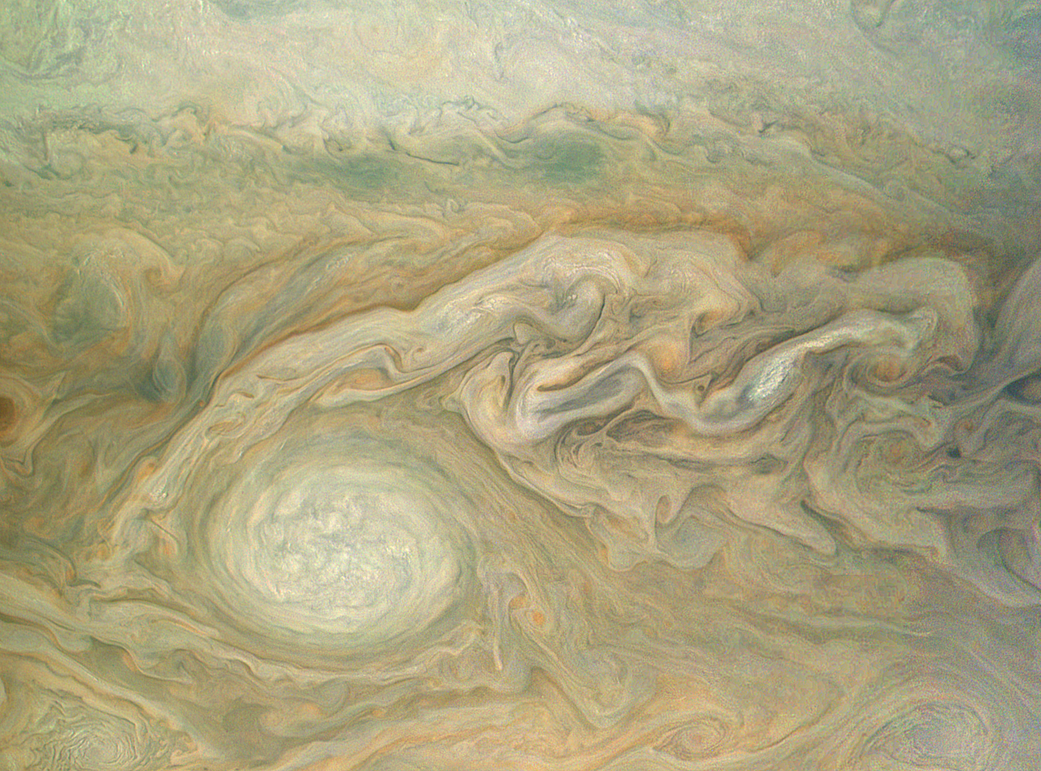 Last summer, the Juno spacecraft flew within about 2,600 miles of Jupiter—the closest any human-made object had ever come to the largest planet in our solar system.

Scientists are still analyzing all the juicy data Juno collected during that first flyby, as well as later orbits, but the first results have just been published. Two new studies in Science and 44 papers in Geophysical Research Letters document a number of odd and amazing findings. Here are the highlights of what we’ve learned so far about Jupiter.

Its north pole is a chaotic mess of storms…

Juno gets 10 times closer to Jupiter’s north pole than any other spacecraft in history. Images from its first close pass show the tumultuous region is dotted with oval-shaped cyclones, which span as much as 870 miles across. That’s wider than the distance between Chicago and New York.

Saturn’s north pole is encircled by an enormous hexagon-shaped storm, with a high-speed vortex spinning at its center. Jupiter’s north pole is not nearly so organized, showing that the atmospheres of these two gas giants are fundamentally different.

Jupiter may not have a distinct core.

“We used to think there was like a little ball of heavy elements, small and quite distinct at its center,” says NASA astrophysicist Jack Connerney. “Now we’re thinking that mass may be much more spread out.” High heat and pressure at Jupiter’s center may be dissolving the planet’s original rock-ice core in a layer of liquid metallic hydrogen, eroding it until it’s no longer sharply differentiated from the rest of the gas giant.

Peering into the thermal structure of Jupiter’s atmosphere, Juno found signs that ammonia wells up from the deep atmosphere, feeding clouds that form giant weather systems around its equator. These “striking and unexpected” features resemble Earth’s Hadley cells, wherein winds blowing toward the equator rise, produce thunderstorms, and then flow back toward the poles. But Jupiter’s cells are much bigger, and instead of water, they rain out ammonia crystals that quickly evaporate.

Juno found that the electrons in Jupiter’s auroras mostly stream upwards, away from the poles and toward space. If Jupiter’s auroras were like Earth’s, Juno would have seen more electrons flowing down as well. “We’ve had the electrons going in the wrong direction this whole time,” says Connerney. “And that’s kind of the theme, here—we’re finding out that a lot of our simple interpretations about Jupiter don’t really hold.”

Its magnetic field is twice as strong as we expected…

For hundreds of years, scientists have wondered how planets and stars generate magnetic fields. On Earth, we can’t see the dynamo that’s generating our magnetic field because it’s buried deep in a rocky, iron-laden crust. But that’s not a problem with a gas giant. Jupiter’s magnetic field is turning out to be a lot more complicated than expected, with lots of small-scale structures embedded. According to Connerney, these variations may mean Juno is getting close to the dynamo, and that Jupiter’s dynamo is very close to the surface. By piecing together data from one orbit at a time, Juno may provide the first clear map of what a dynamo looks like.

Connerney thinks the magnetic field findings are the most exciting so far. “After 500 years of wondering,” he says, “we might actually see what a dynamo looks like by the end of the mission.” But he admits that as a magnetic field scientist, he’s biased. The other teams of researchers are equally excited about their own findings, he says. “It’s like six blind guys telling you what an elephant looks like. It just depends on which part you’re grabbing at that point.”

Juno still has another year or two before it retires, with no doubt its biggest discoveries yet to come. By the end of it, we should have a much more complete picture of the elephant in the solar system.