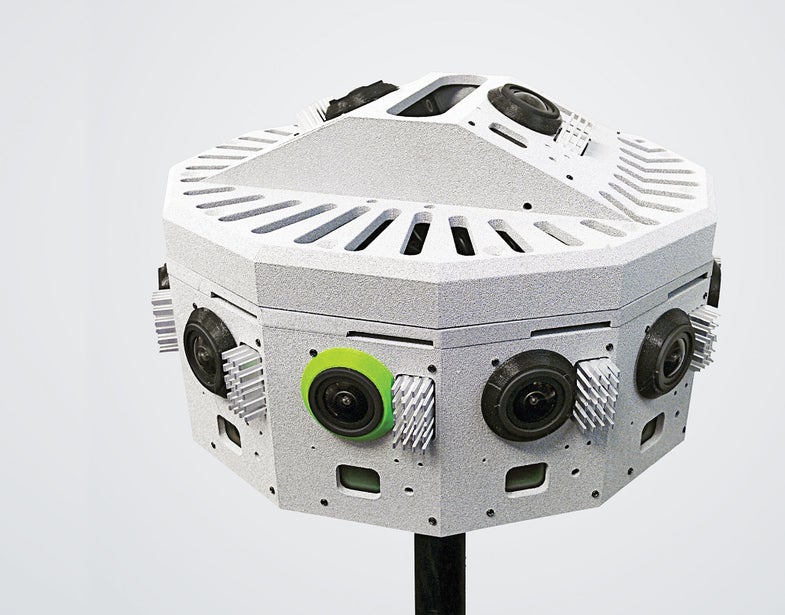 Facebook, Google, HTC, and plenty of startups are betting big on virtual reality. But VR headsets could join the graveyard of overhyped gadgets if there’s nothing to watch. Luckily production houses and filmmakers are working on realistic virtual experiences. Though it’s going to take more than a camera that can shoot 360 degrees of footage.

Arthur van Hoff, co-founder of virtual-reality studio Jaunt VR, is a tinkerer. At age 12 he made a working photocopier out of LEGOs and a felt-tip pen, and he used that ingenuity to build the Jaunt prototype camera. It’s made of 16 modified GoPro cameras housed in a 3D-printed carousel. Jaunt’s fleet of 20 has logged hundreds of hours of footage, like Paul McCartney performing “Live and Let Die” and Yahoo Screen’s sci-fi comedy Other Space. But the real innovation comes after the shoot.

As is, the picture looks flat (Jaunt calls it “2-and-a-half-D”). For normal 3D movies, a pair of stereoscopic cameras shoot two versions of each scene. They’re split into separate feeds—one for the left eye, one for the right—and projected on top of one another, and polarized glasses trick the brain into seeing depth.

Things get messy when 16 cameras are shooting in 16 directions. So Jaunt created a virtual camera. Software synchronizes all the video streams to make it appear as if they were shot by a single camera at the center of the array, and turns the footage into two feeds for the left eye and right eye. Now when the evil villain lunges at you, it feels so realistic, you might forget you can take off the headset.

This article was originally published in the August 2015 issue of Popular Science, under the title “The Camera That Makes Virtual Reality Feel Real.”