For insight into the self-destructive tendencies of cells 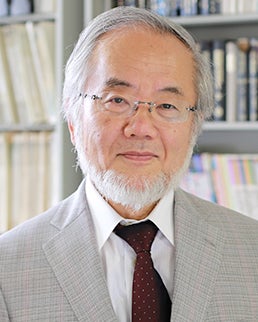 The first Nobel Prize of 2016 has been awarded to Japanese biologist Yoshinori Ohsumi for his work looking into the inner workings of cells.

Specifically, the award was given to Ohsumi in recognition of his work in the early 1990’s looking into the autophagy of cells. Autophagy is a word meaning self-eating, and refers to the process by which cells can break down damaged or less useful components and turn them into building blocks or food for other parts of the cell.

Ohsumi studied autophagy in yeast cells, and identified 15 genes that are essential for autophagy to occur in a cell, and also set the stage for additional research into how autophagy works in humans, not just yeast.

Autophagy plays a key role in the response of cells to infections and stress, allowing the body to recover. Disruptions to the autophagy process or to the genes that control the process have been linked to diseases like diabetes, Parkinson’s disease, and some forms of cancer. Declines in autophagy have also been theoretically linked with issues related to aging.

The Nobel Prizes in Physics and Chemistry will be announced later this week, along with the Nobel Peace Prize, which will be announced on Friday. Ohsumi joins a small company of Nobel laureates–since the awards were established in 1901, 900 people have become Nobel laureates with the awarding of 573 prizes (there can be multiple winners per prize).