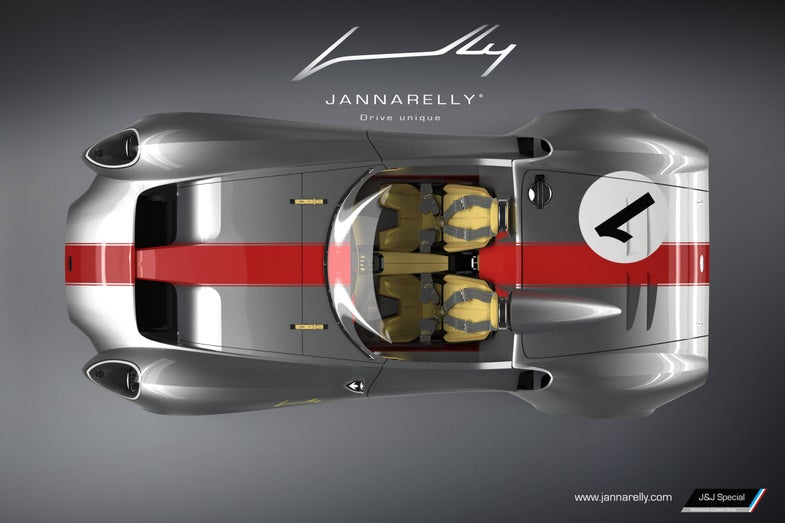 While everyone else is going gaga over connected cars, autonomous cars, and cars that use electricity, hydrogen, or a suspension of unicorn fur as fuel, Jannarelly Automotive is creating a brand-new company that kicks it old school.

Unlike Faraday Future, Jannarelly is not creating a brand-new car from scratch. The company has built a curvy retro-futuristic rear-wheel-drive 2-seat roadster called the Design-1 around a 300-hp, 3.5-liter V6 Nissan engine just behind those seats. The frame and chassis are tubular steel and structural aluminum, but the body itself comes in fiberglass or carbon fiber.

The company was founded by Anthony Jannarelly, a designer for the Dubai-based exclusive supercar manufacturer W Motors, and Frederic Juillot, who also founded Equation Composite, which makes carbon fiber. Lucky, that.

Jannarelly is taking orders for the $55,000 car now with an expected delivery date for early buyers in summer 2016. The company estimates 3 months to build your car after you order it, plus another month or two for shipping. The Design-1 is being built in Dubai to UK standards for low-volume vehicles, which means it may be tricky to get it registered for the road in the United States. But Jannarelly Automotive recognizes that some states have arcane rules, so they offer to explain how to register the car where you live. It may mean calling it a replica of a 1957 Ferrari Testarossa to meet the requirements.

The Jannarelly Design-1 is in a strange spot, as far as automotive manufacturing goes. It’s not a replica; it’s an original design. But it’s got a Nissan power plant. It’s not really a kit car, either, since you’re not building it in your garage on weekends. It comes ready to drive. Although, if you want to swap out engines, Jannarelly says anything that will fit is fine.

Additional components and accessories are already in the works, including a larger windshield with wipers, and a hard top. As new parts become available, owners will be able to upgrade the Design-1 as they like.