How Jaguar cloned a legendary supercar from 1957

How to recreate auto tech from 60 years ago. 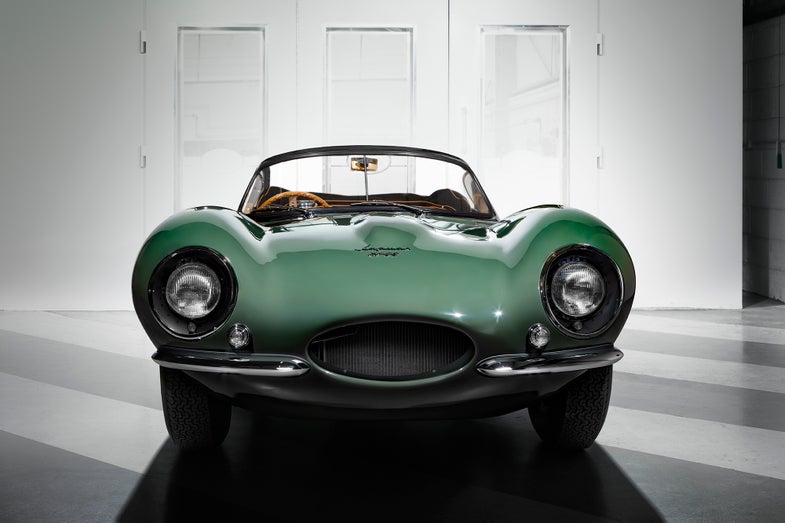 The last nine models of Jaguar's XKSS were destroyed in a factory fire in 1957. Jaguar is rebuilding those lost nine cars to their original specs.
SHARE

In 1957, automakers simply did not make the engineering of its race cars available to the average (even supremely wealthy) driver. Jaguar did. In the 1950s, it let loose its classic XKSS, a model based on the D-Type that won LeMans three years running. It was the world’s first supercar.

After its consecutive LeMans victories, from 1954 to 1956, Jaguar retired from the racing circuits—leaving several racing chassis unused. The automaker’s co-founder Sir William Lyons decided to transform the leftovers into an elite road car, one with minimal styling changes and a few nods to driver comfort. The XKSS became a motoring legend, ultimately ensnaring famous gearheads like Steve McQueen and Jay Leno.

The company planned to produce 100, but on February 12, 1957, a fire ravaged Jaguar’s factory in Brown’s Lane, Tamworth, England, destroying nine of the 25 XKSS builds in progress—along with all of the equipment needed to construct them. Now, to commemorate the car’s 60th birthday, Jaguar Classic has rebuilt the lost nine cars from scratch.

For the first time, Jaguar engineers set out to build an elite 1950s automobile bolt for bolt, without a single original or restored part—reforging the XKSS in exacting detail, not merely replicating its look.

They employed the 21st-century technology to analyze and resurrect the classic car—without installing any modern shortcuts. Here’s how:

The team began “without a single part,” according to Tim Hannig, the director of Jaguar Classic. “We started by studying our extensive archives and the original plans for the car before locating and scanning four original XKSS models.” The resulting 3D CAD model confirmed that hand assembly meant no two 1957 cars were alike.

The body of the car was a magnesium alloy no longer manufactured. Instead, according to Kev Riches, head of Jaguar Heritage Engineering, the team turned to “the closest substitute,” a 5,000 spec series material produced in a single sheet.

While some internal parts could be machined, the bodywork of the new XKSS run was shaped by hand like the 1957 version—by the direct descendants of the same Warwickshire men who banged out the originals.

Because it was assembled by hand, the 1957 XKSS “had irregularities and panel gaps no modern automaker would allow out of the factory,” according to Hannig. “Our team used computer imagery to determine what gaps should appear where to maximize authenticity.”

“Our customers are rivet counters, and they know these cars very well,” Riches says. “We matched the original design precisely with more than 2,000 hand-driven rivets made out of the same alloys described in the original documents.”

They don’t make robots who can do slow welding like 1950s craftsmen, so all welds were performed by hand with a bronze mixture chemically calculated to match original specs.

These parts were also made from scratch according to archived designs—“from the 250-horsepower, straight-six engine to the gearbox to the suspension,” Riches says. “We replicated the original 1950s Imperial Reynolds steel tubing in our fabrication department to exact specifications.”

Jaguar invented the disc brake, and the XKSS was one of the first cars to use them. The elaborate design applied 20 individual brake pads on pistons that needed to be installed individually. The pad materials were made at Jaguar’s facilities with a chemical composition as close to the originals as possible.

According to Hannig, Dunlop, which made the original tires for the XKSS, dove into their own archives to recreate the rubber material of that era. “Rubber manufacturing has come a long way, and it’s hard to turn back the clock,” Hannig says. “We may end up with more grip than the original car.”

Modern improvements in tanning create leathers that hold up better than those of 60 years ago. Jaguar had to make the upholstery for the new XKSS by hand, weathering the leather so it flowed and bent as it did in the original cars.

Regarding the steering wheel, Hannig says they’re still “searching for the right cuts of wood that will match the tactile grain we’re seeing in the visual analysis of the originals.”

The Most Significant Change

“We only departed from the original designs where safety became an issue,” Riches says. “Our petrol now contains a percentage of ethanol, and that would eat through the original fuel bag within a year. To avoid fuel spills and fires, we allowed a modern synthetical material for the fuel system.”

Jaguar will build 10 XKSS in total, with each designed to be identical to any 1957 model still in existence. The first assembled vehicle will never go on sale, serving as a testing and show vehicle. Car Zero underwent extensive track shakedowns before clearing the way for the nine sold builds. It will make its world debut around the 2016 Los Angeles Auto Show.

All nine XKSS clones were spoken for (sight unseen) days after Jaguar announced the project in April 2016. Its price was never announced, but the cars are believed to have sold for between $1.5 million and $2 million.