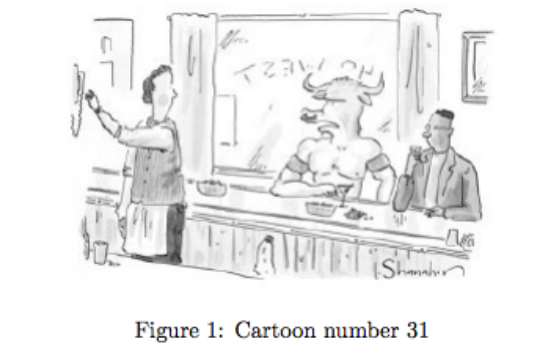 Artificial intelligence can do a lot of things, like recognizing your face or identifying good art. But it still can’t tell a joke. And though humor has a reputation for being subjective and changing over time, researchers have long suspected that there might be a few basic elements of humor. Researchers from the University of Michigan, Columbia University, Yahoo! Labs and the New Yorker have teamed up, channeling the power of big data to help identify some of those building blocks of humor. The study was published in the online journal arxiv.

Every week, the New Yorker runs a caption contest in the back of the magazine. 5,000 people enter submissions, then readers vote on which of the top three is the best fit for the cartoon. That has created an enormous database of captions—more than two million captions for more than 400 cartoons in the past decade.

The researchers wanted to use this data to create an algorithm that can distinguish the funny and unfunny captions. The researchers picked 50 cartoons and the 300,000 captions that corresponded to them and used a program to analyze and rank the captions linguistically, looking at whether the captions were about people or dealt with positive or negative emotions. They also created a different ranking using network theory, which connected the topics mentioned in each. Then they got real people to weigh in on the humor, asking seven users on Amazon’s Mechanical Turk to rank which of two caption options is funnier.

They found a few trends when they compared all the rankings to one another. “We found that the methods that consistently select funnier captions are negative sentiment, human-centeredness, and lexical centrality,” they write.

Those conclusions aren’t that surprising, given the New Yorker‘s readership, they note. But it’s hard to know what these conclusions mean for people trying to develop a funny robot. As MIT Tech Review writes:

This kind of work in itself won’t help a functional joke-writing machine. But the team is also releasing the cartoon data they used to the public. So, as MIT Tech Review notes, “if there’s anybody out there who thinks they can do better, they’re welcome to try.”