A 14-year-old arrested for bringing homemade clock to school draws support from Obama, Zuckerberg, and more 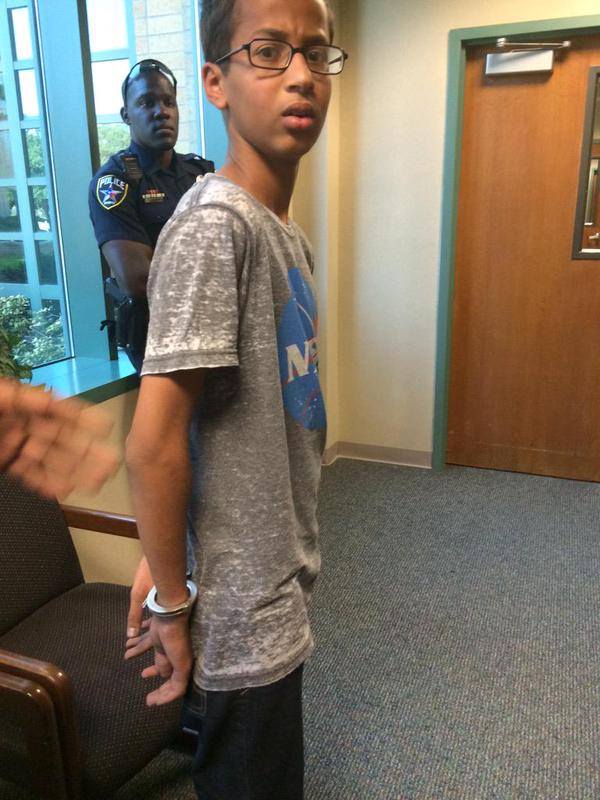 Ahmed Mohamed, 14, was arrested by Texas police after his homemade clock was mistaken for a bomb. twitter.com/IStandWithAhmed
SHARE

Any 14-year-old would be proud if they built a functioning electronic device, and so on Tuesday, Ahmed Mohamed of Irving, TX, brought the clock he built to school to show his engineering teacher. However, another teacher alerted school authorities, who called the police, after seeing the clock and believing it to be a bomb. Ahmed was led out out of the school in handcuffs and placed in juvenile detention and, according to the Dallas Morning News, his family fears he was arrested for being a Muslim.

The Internet has responded strongly to Mohamed’s arrest with #IStandWithAhmed, a grassroots online campaign where people can show the young inventor their support.

It’s garnered the attention of scientists:

And even earned Ahmed an invitation to Facebook headquarters from Mark Zuckerberg and to the White House from President Obama:

Irving mayor Beth Van Duyne issued a statement via her Facebook page, and says she doesn’t fault the school staff or police:

Since his arrest, Ahmed has been released and his family started a Twitter account (@IStandwithAhmed) and personally thanked supporters on Wednesday.