ISIS And America Both Lost Drones This Week

That's about the only thing they have in common 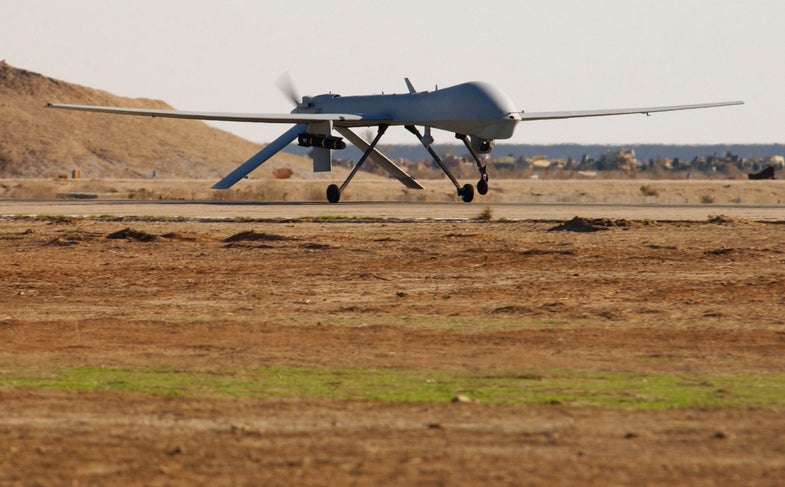 A US Air Force (USAF) MQ-1 Predator armed with an AGM-114 Hellfire missile and assigned to the 46th Expeditionary Reconnaissance Squadron (ERS), taxis out to the runway at Tallil Air Base (AB), Iraq, in support of OPERATION IRAQI FREEDOM. SSGT SUZANNE M. JENKINS, USAF
SHARE

Yesterday, the United States lost a Predator drone that was operating over Syria. Today, the American military’s Central Command noted that the U.S. destroyed several ISIS targets, including a remotely piloted aircraft near Fallujah.

The MQ-1 Predator is probably the most iconic drone in the military. A matchstick with wings, a pair of missiles, and a camera slung underneath, the Predator is made for flying in “uncontested airspace”–that is, in places where they won’t get shot down. The counter-insurgency warfare in Iraq and Afghanistan lends itself to drones like this, where slow planes with long flight times can surveil for bomb-placers or armed men not wearing uniforms. Simple anti-air weapons can shoot down drones if they’re flying low enough. Before its civil war began, Syria stockpiled Cold War-era Soviet anti-air missiles, like the SA-3 GOA which might have shot down the Predator, and Russia continued selling Syria new missiles after war broke out.

ISIS’s drone, by contrast, is no armed sentinel. A military spokesman said it was “a small, unarmed hand-held type of the sort that can be purchased commercially,” and that it could be used for battlefield surveillance. That includes basically any quadcopter or remote-control plane with a camera that can stream video to another device. Hand-held drones are great for troops fighting on the ground, because they give them a safe way to look over the next hill or around the corner without sticking their neck out. The RQ-11 Raven is a hand-tossed scout used by America’s military for that exact purpose, and the Army has thousands of them.

ISIS having a drone signals that they’ve adopted the trappings of modern warfare, but it’s hardly the only signal they’re sending. While anti-air missiles protect the Assad government in Syria, ISIS is digging trenches around the Iraqi city of Mosul in preparation for a potential assault by the tanks and ground troops of the Iraq Security Forces. Drones or no, it’s a tactic far more reminiscent of 1915 than 2015.