Is There A Cure For Color-Blindness?

Short answer: It could be in sight 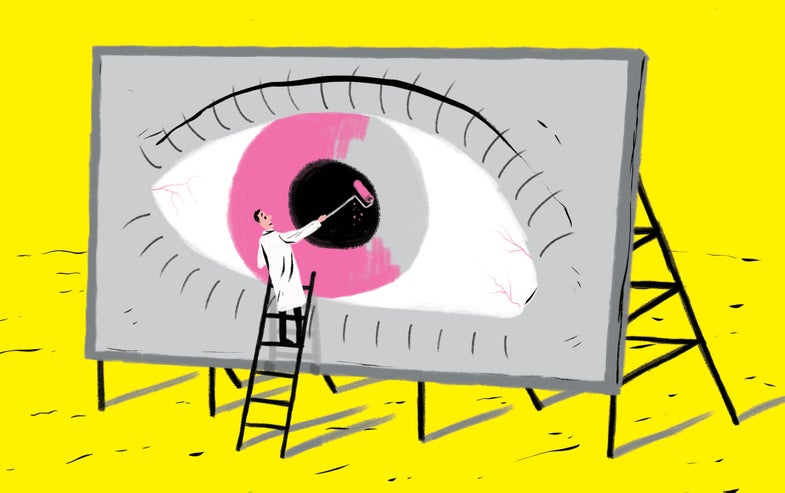 The colorblind don’t just suffer limited career choices (pilot is out). They also miss some of life’s biggest pleasures— vibrant sunsets, autumn foliage, the ability to determine if a tomato is ripe. “Nobody chooses a black-and-white TV over color,” says University of Washington ophthalmology professor Jay Neitz, who has ­devoted his career to studying color deficiency. “­Color makes us happy.”

Cone cells in the retina normally help the brain translate lightwaves into what we perceive as colors. When those cells lack red or green photopigments, it causes the most common colorblind disorder, one that afflicts 1-in-12 men in the U.S. and 1-in-230 women. It’s the most common ­single-gene defect in the population. So far, there’s no cure. Soon that may change.

Neitz and his wife, Maureen, with other scientists, have successfully tested a gene therapy on male squirrel monkeys, all of which are colorblind. First, they packed a normal human photopigment gene into a harmless virus, then surgically inserted it—via needle—under the monkeys’ retinas. Five months later, the moneys passed a color test in which they were awarded treats for picking colors on a computer.

Sticking a needle deep in a human eye, however, is risky. Among other things, it could cause blindness. So the Neitzes are working on a safer gene-delivery method, a shot that is delivered into the vitreous—the clear substance between the eye’s lens and retina. Such vitreous shots are already in wide use to deliver medication for conditions like macular degeneration. One problem, though: There’s no certainty that genes introduced into the vitreous will get where they need to go. “The virus itself will have to penetrate the retina,” to get to the cone cells, says Neitz. “We don’t have that working perfectly yet.” Human clinical trials are years away. Until then, a new company, EnChroma, makes glasses that enhance color perception for some types of deficiencies.