On a semi-regular basis 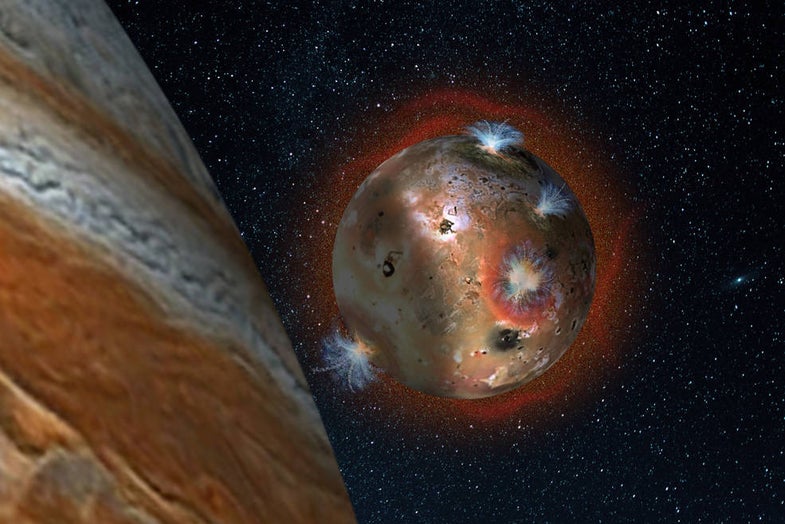 Imagine what would happen if our atmosphere froze solid, contracting and collapsing on the ground. It would likely be enough of a catastrophe to end life on this planet. On Jupiter’s moon Io, it’s just your average Tuesday night.

In a paper published today in the Journal of Geophysical Research: Planets, researchers announced that they had discovered an odd pattern on Io, the most volcanically active place in our Solar System. The thin atmosphere, made up mostly of sulfur dioxide (SO2) gasses produced by erupting volcanoes, collapses every time Jupiter passes between the moon and the Sun. The collapse lasts for about 2 hours every 1.7 Earth days, then the light from the sun warms the moon, sublimating the sulfur dioxide back into a gas from its solid state.

“This confirms that Io’s atmosphere is in a constant state of collapse and repair, and shows that a large fraction of the atmosphere is supported by sublimation of SO2 ice,” said John Spencer, a co-author of the new study. “Though Io’s hyperactive volcanoes are the ultimate source of the SO2, sunlight controls the atmospheric pressure on a daily basis by controlling the temperature of the ice on the surface. We’ve long suspected this, but can finally watch it happen.”

The first observations of the contracting atmosphere were made in 2013 using the Gemini North telescope, which has a mirror that measures 26 feet across. By using the telescope and the Texas Echelon Cross Echelle Spectrograph (TEXES) instrument, which measured the heat signature of the atmosphere as it collapsed into frost.