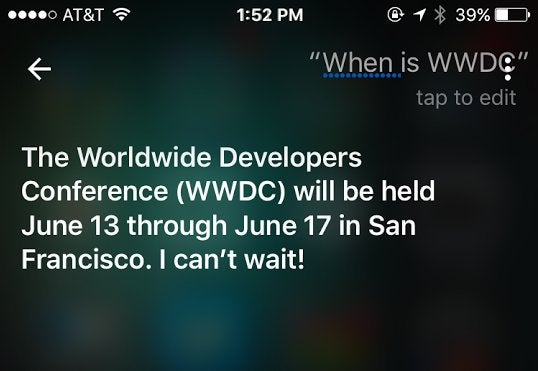 Apple is known for announcing new hardware and software by taking to the stage and giving its creations the star treatment. The iPhone, iPod and iPad were revealed this way, new versions of Mac and iOS software were revealed this way and, most recently, the iPhone SE was revealed this way. Every June, the tech giant introduces software improvements for its various products and this June is no different. Unfortunately for Apple, Siri just spilled the beans on where and when that presentation will take place: Apple’s Worldwide Developers’ Conference (WWDC) 2016 will take place June 13-17 in San Francisco.

The WWDC keynote always takes place the first day of the conference. At WWDC 2015, the company brought iOS (and Android!) users news of the release of Apple Music. Apple, which has had a huge impact on the digital music industry since the first days of the iPod, created the streaming service after acquiring Beats, an audio product manufacturer founded by music producer Dr. Dre. Apple also used last year’s WWDC to introduce iOS 9, OS X El Capitan and WatchOS 2. With hardware announcements taking place throughout the rest of the year, Apple uses WWDC to focus solely on the software that runs on its devices.

Apple’s WWDC 2016 event will likely lift the cover off of iOS 10—the company’s latest version of iPhone, iPad and iPod Touch software. In addition, we could see changes to Apple Music, watchOS, Mac OS and more. We’ll bring you updates as they’re revealed. Stay tuned.