The Hidden Talents of the Lowly Sea Cucumber 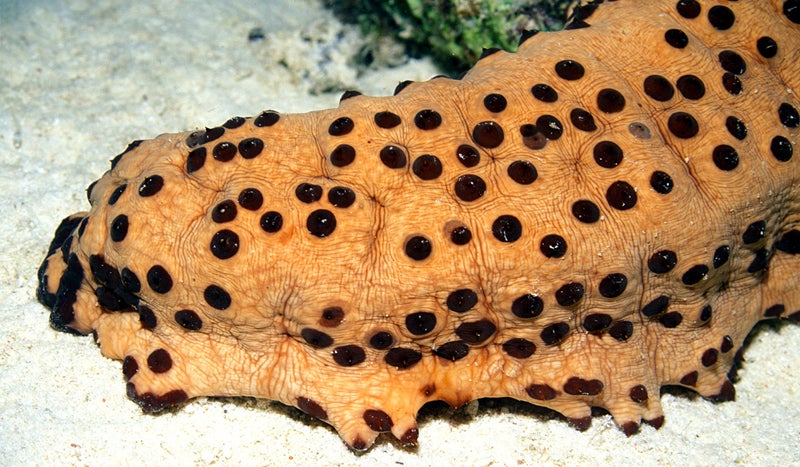 In all its sausage-like glory, photographed in the Caribbean Sea.

Though it’s one of the most perfectly named living things on this planet, the sea cucumber, on first glance, isn’t among the most exciting aquatic species. Distantly related to starfish and sea urchins, the sea cucumber in appearance lacks the brio and allure of its cousins, and except for a few variations among subspecies, the general body plan of the cucumber basically resembles a large, leathery sausage crawling along the ocean floor. Yum.

But as with many of the world’s more mysterious species, there’s more than meets the eye with these creepy crawlers. In several Southeast Asian traditions, sea cucumbers have been considered both a culinary delicacy and a homeopathic panacea. And more recently, scientists have found in the humble sea cuke an unlikely muse for some exciting new medical technologies.

One such development is a new plastic that mimics a sea cucumber’s ability to quickly change the rigidity of its skin as a defense mechanism. When dry, the new plastic is hard and stiff; when wet, it softens and becomes flexible, and it’s capable of switching quickly back and forth between the two states.

One of the potential uses for this new plastic is incorporating it into brain implants that could be used to treat Parkinson’s disease or even spinal injuries. Currently, techniques to treat Parkinson’s include implanting an electrode, basically a brain pacemaker, into the basal ganglia of the brain where motor functions are controlled. The process, known as deep-brain stimulation (see our September 2007 feature for more info), sends impulses to that region of the brain to help control function. The drawback, however, is that the electrodes tend to be made of titanium or other hard metals that can accidentally destroy some surrounding cells, which complicates matters when scar tissue begins to build up.

The new sea-cucumber-inspired material is hard enough when dry to be easily implanted, yet can more closely replicate the composition of the surrounding tissue in a fluid-filled brain, leading to fewer complications. Other potential uses are new forms of casts that would strengthen and soften as needed, and bulletproof vests that could be turned on and off.

Another recent study shows that a gene in the sea cucumber blocks transmission of the parasite that causes malaria. Passed to humans by mosquitoes, malaria threatens around 40 percent of the world’s population and is blamed for up to a million deaths a year. The idea is to incorporate the gene into mosquitoes, causing them to produce the protein lectin, which is poisonous to the malaria parasite early in development. The new, genetically modified mosquitoes would be released into the wild in hopes that they reproduce and spread the new gene to future generations and tamp out the spread of malaria.

There are several other studies being conducted with the sea cucumber. A patent has been submitted for the process of centrifuging collagen from sea-cucumber flesh into layers to be used in artificial corneal transplants, and the connective tissue of sea cucumbers might be perfect as replacements for torn tendons in humans. Even certain cells, believed to be responsible for the regenerative healing process of the sea cucumber, are being isolated and tested to see if they can help speed up our own healing.

While most people probably aren’t that interested in eatching one, humanity as a whole is certainly ready to benefit from the potentially live-saving technology currently being derived from the lowly sea cucumber. Even if it does mean sticking them in your brain.