NASA imaged a 12-mile-high cake slice of the storm. 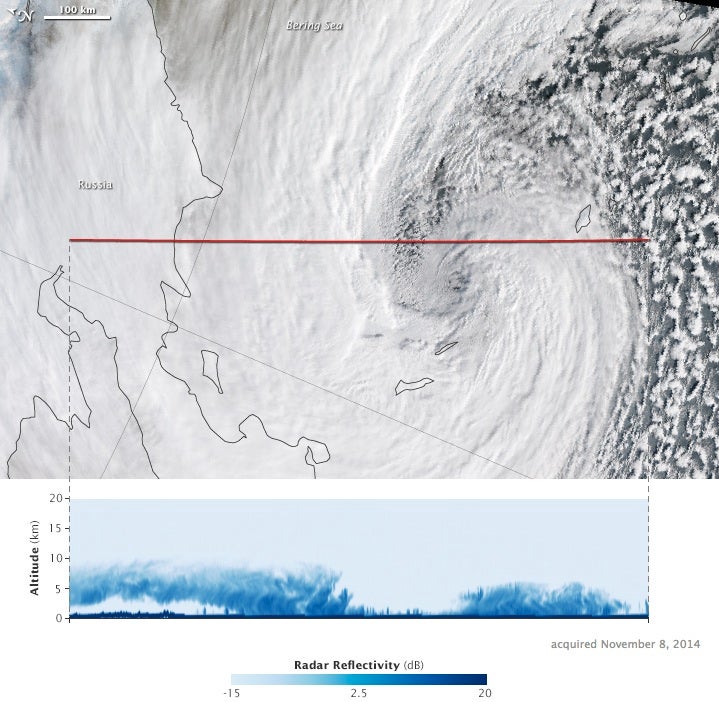 Top and Interior Views of a Bering Sea Storm

Got a lot of snow last week—or yesterday? You can blame this guy, above. The satellite image, taken November 8, shows a superstorm over the Bering Sea. The storm was one of the most intense ever recorded in the region, creating hurricane-force winds and 26-foot-tall waves. The storm was also a part of a series of meteorological events that eventually led to the recent cold snap in the American Midwest and northern New York State.

NASA’s Suomi-NPP satellite captured this image on the day the Bering Sea storm peaked in intensity. Minutes later, NASA’s CloudSat flew over the storm in a straight path, marked in red in the Suomi-NPP image. CloudSat’s instruments recorded what the storm would look like if viewed in cross-section, from the ground up. You can see CloudSat’s data in blue, below the Suomi-NPP photo. It’s a 12-mile-tall cake slice of the storm.

The lighter blue parts of CloudSat’s image represent thin ice clouds, while the darker blue parts represent thick clouds and snow. Scientists hope to use this data to learn more about how processes inside winter storm clouds affect the storm’s strength and lifecycle.

CloudSat has been observing clouds over Earth since 2006 and has made a number of notable images. Here’s the interior of Superstorm Sandy, as imaged on October 29, 2012. The freezing line is the line in the clouds above which ice particles form, and below which rain forms:

And check out this image, from 2009, of the inside of Super Typhoon Choi-wan. That dip in the middle is the eye: